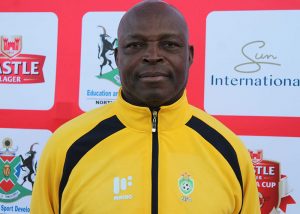 Drawn in Group A with Egypt, DR Congo and Uganda.

The 67-year-old is a revered figure of the game in Zimbabwe, having featured in defence in their first-ever post-independence international in 1980, and he has coached the national team now on four separate occasions.

He took Zimbabwe to a maiden Cup of Nations finals appearance in 2004 and has also worked as club coach in neighbouring South Africa.

In 2012 he was given a 10-year ban for alleged match-fixing but this was later lifted as the investigations stalled.

Bought while still a teenager by the South African giants Kaizer Chiefs from an amateur outfit in Zimbabwe, he proved an instant success in front of goal, nicknamed ‘the Smiling Assassin’ by supporters.

Bundesliga side Hoffenheim bought him in 2011 but he played sparingly in his first season and is now on the books of Anderlecht in Belgium.

He was 20 years old when he made his national team debut and has since scored 22 times for his country.

Top place in Group G, ahead of DR Congo, Liberia and Congo.