Source: Families of AFZ crash victims get support | The Herald

Mutsa Mupamhanga (right) from the Tobacco Research Board hands over an assortment of goods to Minana, the daughter of the late Air Force of Zimbabwe pilot, Anita Mapiye, who was accompanied by the pilot’s mother, Eunice, (centre) and sister Preciuos Mapiye at Manyame air base in Harare yesterday.

Families of victims of the Airforce of Zimbabwe helicopter crash that happened in Goromonzi early this year, yesterday received donations worth thousands of dollars as part of efforts to render support.

The donation included an assortment of basic commodities and clothes worth $140 000 from Manyame Air Base community and Kutsaga Tobacco Research Board.

The assistance come after the AFZ last month handed over property which included two double beds, a gas stove with a 9kg tank, a television set, blankets, cutlery and pots, a complete solar power unit, a kitchen unit, a wardrobe, food, a lounge suite and US$400 to the Fenyere family in Arcturus who lost their daughter Jade who was sleeping when the helicopter burst into flames.

Speaking while handing over the groceries to the families, the deputy Commander of Manyame air base, Group Captain Maxwell Sakupwanya said they will continue to stand with the Fenyere and Mapiye families and all relatives of the deceased aircrew. 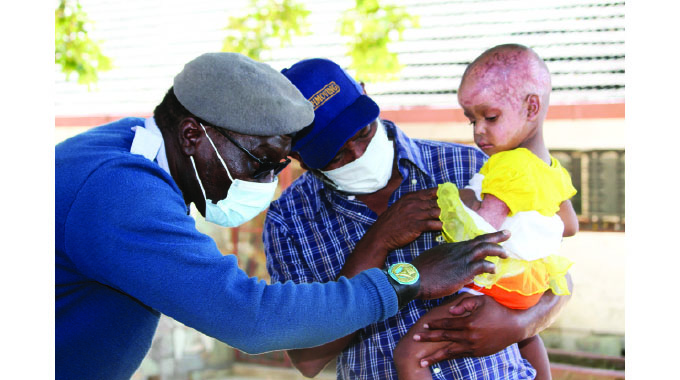 Air Force of Zimbabwe (AFZ) officers donate to a child who sustained injuries when an AFZ helicopter crashed into their home in Goromonzi early this year.

““Yes we know it takes time to heal from this painful experience ,but we are also there to support and provide welfare to the families of our beloved ones.

“Our support will provide healing to the families, our culture also tells us that we need to contribute so that these families will have a sigh of relief from what had happened two months ago.

‘’Through this donation we are also welcoming a baby Jada who was in hospital two months ago, she was discharged last week so we are here to welcome him with these assortments of groceries including diapers, cereals and other essential foodstuffs.

Group Capt Sakupwanya urged other companies to take responsibility and ensure that the families of the crash victims acquire essential services for the betterment of their future.

“We want also to see Anita’s child growing up similarly like other children so will continue to provide necessary support to the families,”he said.

Mr Elias Mapiye, Anita’s father appreciated the support offered by Kutsaga Tobacco Research saying it will go a long way in providing the welfare and support of the baby.

“As the Mapiye family, we are very grateful to the AFZ and Tobacco Research Board for the continued support that they have been rendering us, it was a difficult time we encountered, Anita was a loving daughter who was kind and loving, we really appreciate your effort,”said Mr Mapiye.

Mr Joseph Fenyere, Jade’s father also welcomed the development saying AFZ is an organisation which shows a sense of responsibility.

“Starting from the day of the crash, during the funeral here up to the date we buried my daughter in Bocha. I appreciate the support as it is the beginning of a relationship between the family and AFZ,” he said.

Recently the chairman of the CAFZCF board of trustees, Mr Toindepi Muganyi, called on well-wishers to support the charity fund so as to help the family restore its lost and damaged properties.

The Commander AFZ Charity Fund was established in 2011 as a vehicle to mobilise resources and implement projects aimed at assisting disadvantaged people and communities.

Since inception, the charity fund has completed a number of projects including a clinic, primary and secondary schools at Murongwe in Mashonaland Central and the construction of Negove Clinic in Mberengwa District, Midlands Province, among others.