Zvamaida Murwira
Senior Reporter
ROMAN Catholic cleric and national hero, Father Emmanuel Ribeiro who made valuable contributions to the spiritual being of people and the liberation of the country foresaw his death, Vice President Constantino Chiwenga has said.

He said Fr Ribeiro had a premonition of his death after he told those who came to see him in hospital that his days were numbered.

VP Chiwenga said this yesterday at St Mary’s Queen of Peace Highfield parish where he addressed mourners attending a mass for the late national hero.

He said Fr Ribeiro, helped in saving President Mnangagwa from the hangman’s noose after he had been arrested for bombing a locomotive in Masvingo as part of the famous Crocodile Gang.

VP Chiwenga said Fr Ribeiro also drove former President Mugabe and nationalist Cde Edgar Tekere to cross the border into Mozambique where they were to lead the liberation struggle. 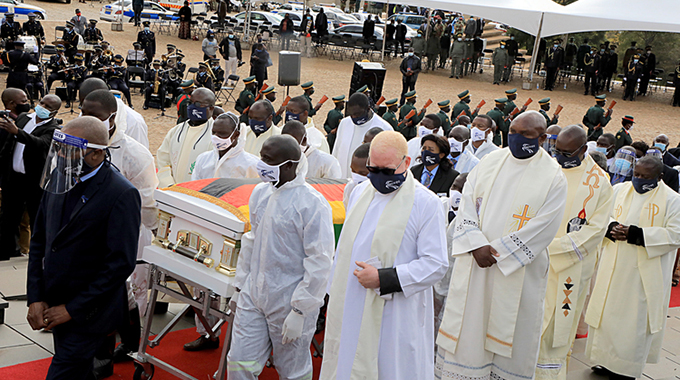 “He had a calling to lead and dedicated spiritual life for God and he lived that life up to the end. Secondly, he is a national hero. It was not easy to always see condemned prisoners being hanged while he was a prison Chaplain. He would pray for them.

“He also drove former President Mugabe and Edgar Tekere to cross the border into Mozambique to lead in the execution of the liberation struggle,” said VP Chiwenga.

“Coming to the church, the songs that he composed helped pull people closer to God. He is now going to be with those whom he worked with and those that he helped through prayers.”

VP Chiwenga said Father Ribeiro had a premonition of his death when he was admitted in hospital.

“I am pleased to say I saw him during his last days in hospital saying he will not be able to come out alive and I said you can’t say this Father, but he said that was the situation. So I bade him goodbye.

“He even directed people where he had left his laptop and other literature saying it would help in putting up the history of this country together that he was writing about,” he said.

Head of Roman Catholic diocese for Harare, Archbishop Christopher Robert Ndlovu conducted yesterday’s mass before the body was taken to the national shrine for burial.