Harare – Sekai Hwangwa was asleep when soldiers carrying guns burst into her home in Zimbabwe’s capital during a deadly crackdown on anti-government protests this month and beat and raped her. 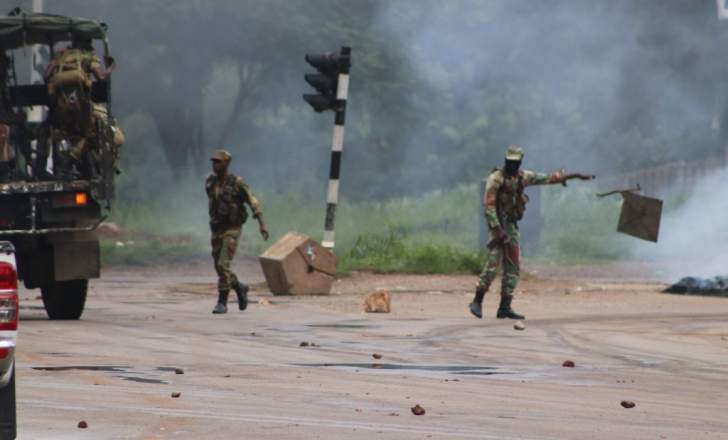 The 21-year-old, who was too afraid to report the attack to police, said the soldiers told her she was being punished for joining protesters who burned tyres and looted shops after President Emmerson Mnangagwa raised fuel prices.

“Soldiers stormed my home at midnight on the second day of the protests, their faces hidden behind balaclavas, and started beating me,” said Hwangwa, whose name has been changed to protect her identity.

“They were accusing me of participating in the protests, saying I was one of the hooligans that burnt tyres on the streets. After that, they raped me,” she told the Thomson Reuters Foundation.

Mnangagwa’s government has come under severe criticism for a crackdown on protestors that rights groups say killed at least 12 people and injured scores.

The president, who took over in 2017 when his predecessor Robert Mugabe was forced to resign after a coup, promised during campaigning for a presidential election last year to repair the economy and break with Mugabe’s politics.

But the crackdown has alarmed rights groups, who fear a return to the authoritarian regime that characterised much of the Mugabe era, and have demanded the government investigate reports of rape and other abuses by security forces.

“Beatings, harassment and other abuses have continued without actions from government to hold accountable those committing the abuses,” said Dewa Mavhinga, Southern Africa director for Human Rights Watch.

Amnesty International said the Zimbabwean authorities “must act swiftly to ensure security forces are held to account for the ongoing brutal human rights violations – including torture, rape, beatings and killings of civilians”.

The army said in a joint statement with police on Tuesday that no rapes had been reported and urged victims to come forward.

“Any abuse should be reported to the police with a view to arrest the perpetrator, gather evidence and initiate interventions for the victim to receive medical care,” it said.

But victims contacted by the Thomson Reuters Foundation said they had not come forward for fear of reprisals.

Nerisa Zivhu, 24, fled her home after she was gangraped by soldiers and is now staying in a safe house in the capital Harare run by a charity.

“They kicked my bedroom door open before raping me without protection, saying I deserved the punishment for participating (in protests),” said Zivhu, whose name has also been changed.

“What will happen to me if I report? Will I survive after that? Will I be safe?”

The head of the Musasa Project – a charity set up to tackle violence against women and girls – urged the country’s female defence minister, Oppah Muchinguri-Kashiri, to investigate.

“We all celebrated your appointment as minister of defence. Our expectation was that women and girls would in our lifetime feel safe around the military,” Nettie Musanhi tweeted.

“Reports of sexual abuse against women and girls by soldiers are worrying and require investigation.”

Newer Post
No to State sponsored violence: VIDEO
Older Post
Zanu-PF thanks ANC for demanding the removal of sanctions imposed on Zim