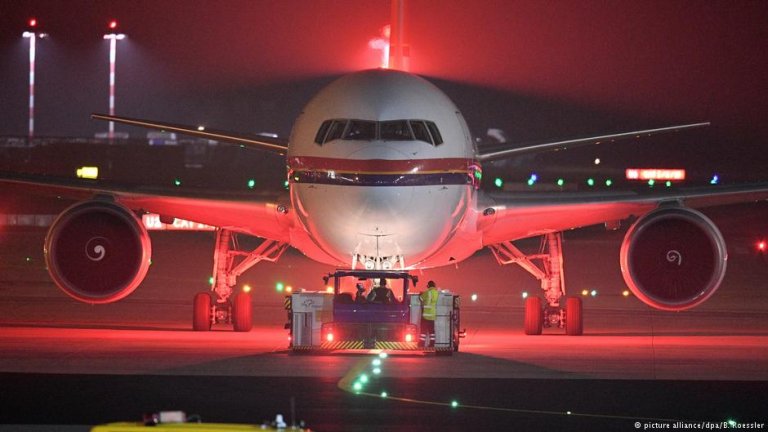 AT least 36 Zimbabweans, who stayed behind in the United Kingdom, raised fears of persecution by President Emmerson Mnangagwa’s government, citing human rights violations in Zimbabwe.

Only 14 out of a possible 50 people touched down at the Robert Mugabe International Airport in Harare.

They were immediately whisked away by Zimbabwe United Passenger Company buses, accompanied by police, who maintained a heavy presence at the airport alongside other State security agents.

Information secretary Ndavaningi Mangwana said the 14 were taken to ZIPAM, where they will be in isolation for 10 days before meeting their families.

Those who had gathered to welcome their relatives were not afforded the opportunity.

“They have been taken to ZIPAM, where they will have COVID-19 tests and be quarantined for 10 days. After being cleared for COVID-19, they will join their families and communities.”

Mangwana said the safety of the deportees was guaranteed, despite the national broadcaster yesterday stigmatising them as criminals who have come back home with nothing, gushing: “We welcome these fellow citizens home. They will be safe and the same opportunities availed to everyone else will be available to them.”

But reports from the UK suggested that there were growing fears over the safety of the deportees. Most of them claimed they fled Zimbabwe due to human rights violations and were likely to be tracked down and persecuted.

Besides the fear of human rights violations, others failed to travel after they were in contact with COVID-19 positive colleagues. There was an outbreak of the deadly virus at the Brook House near Gatwick Airport in London.

Other UK reports suggested that 75 parliamentarians signed a letter by the all-party parliamentary group on Zimbabwe, raising concerns about what they said was a deteriorating political and human rights situation in Zimbabwe.

“Hours before the flight was due to take off, two detainees due to board it threw themselves from a second-floor, landing at Colnbrook immigration removal centre onto netting below. They are believed to have been unharmed and were not removed,” reports said.

However, an emergency out of hours High Court challenge by Duncan Lewis solicitors to halt the whole flight did not succeed.

Bella Sankey, director of the charity Detention Action, said: “The High Court’s landmark intervention rightly recognises the real risk of appalling human rights violations when the Home Office allows the Zimbabwean government to question those it seeks to expel.

“But how horrifying that others subjected to the same practice may have been loaded onto the plane, unable to hear about this judgment or use the precedent to prevent their own removal.”

According to British media, the deportation comes after the British government reportedly struck a secret deal with the Zanu PF regime last month to extradite hundreds of Zimbabwean asylum-seekers. Although the identities of the people were not made known, the British media claimed most of them could be human rights activists who fled political persecution from the country.

Rosie Huzzard of Walls Must Fall told The Morning Star: “It appears that Priti Patel and her Home Office ministers are happy to strike deals with oppressive governments such as Zimbabwe to put the lives of people with well-established lives in the UK at serious risk, just to make a bit of a splash in the news. Deporting 150 black Zimbabweans, many of whom were trade unionists and democracy campaigners — which is why they fled in the first place — is systemic racism. She is leading it.”

But a Home Office spokesperson said: “Foreign criminals who abuse our hospitality should be in no doubt of our determination to deport them. Any foreign national who is convicted of a crime and given a prison sentence is considered for deportation at the earliest opportunity.”