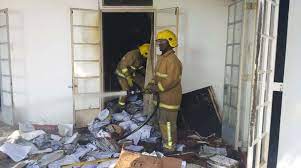 A FIRE destroyed staff quarters at Kwekwe General Hospital on Tuesday, making it the second fire incident to affect the country’s health institutions after a similar incident occurred at Mpilo Central Hospital in Bulawayo last
month.

“A nurses’ and doctors’ cottage at Kwekwe General Hospital has been gutted by fire.  Resource mobilisation is already underway,” Mangwana said.

Kwekwe General Hospital medical superintendent Patricia Mapanda was also quoted saying the fire razed down one of the staff residences and destroyed property.

She said the affected staff lost almost everything as they did not get time to remove their property, adding that the cause of the fire was yet to be ascertained.

A fortnight ago, 39 health practitioners were left homeless at Mpilo Central Hospital where the fire, believed to have been caused by an electrical fault, destroyed property worth US$500 000.

Government moved in and secured alternative accommodation for them at Bulawayo Polytechnic, St Patrick’s hostels and Ekusileni Centre.