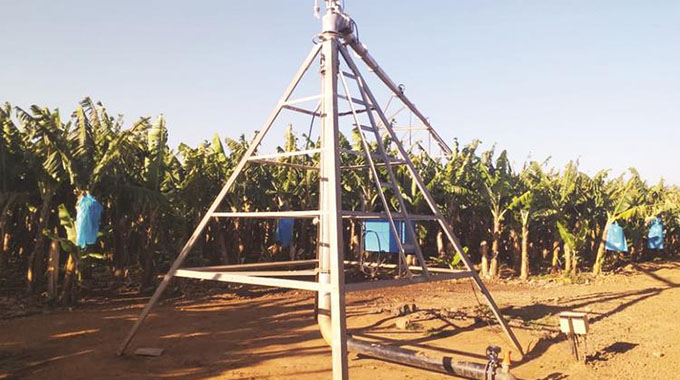 Farmers in Middle Sabi have gone into partnership with Makata Private Limited, a firm that produces a variety of crops, with the relationship turning their fortunes in the desired direction.

The partnership has resulted in bananas, potatoes, maize and citrus changing the livelihoods of people in Chipangayi and surrounding areas.

He said: “We are feeding the community and the nation as a whole. Again, we create employment in the area.’’

As President Mnangagwa’s clarion call of “Zimbabwe is open for business’’ echoed throughout the world, Mr Peter Adair McCarter, a Zimbabwean entrepreneur who owns Makata, a company registered in Zimbabwe, partnered A2 farmers in the area.

His first contact with them came in June 2018, and since then, the company’s visibility has grown in leaps and bounds.

Today, its branded vehicles are seen all over the place.

Brenda Sithole, a worker from Kondo communal lands, is happy with the way the company has changed the face of Chipangayi in the two years it has been operating in the area.

“Makata has brought joy to the female workers around the area and the working conditions are perfect,” she said.

Mr Salimo Kudooko, the firm’s accountant, in reply to emailed questions, said: “The name Makata was derived from the Shona pronunciation of the shareholders’ surname McCarter.

At a time when the agrarian revolution is in full swing for the nation to have food self-sufficiency and for the country to generate foreign currency, Makata has stepped up production of bananas, potatoes, maize and citrus.

Middle Sabi’s soil is rich and can sustain most crops that are grown in Zimbabwe. At one time, the area was considered as one of the bread baskets of the nation.

“We have 66 hectares under banana plantation; plans are under way to get to 100 hectares by the end of 2021,” said Mr Kudooko.

“At least 33 hectares of potatoes are being harvested; we are averaging 35 tonnes per hectare. Under maize, we have 140 hectares and we believe we are doing our small contribution to the nation’s desire for food self-reliance.

“Lemons, which fall under citrus, have eight hectares. We hope to expand citrus production as well.”

In a positive move to induce workers to take the farm as a place of choice for employment, the company has a kitchen which caters for their nutritional requirements.

Zimbabwe is an agro-based economy and most of the employees are in the agriculture industry.

“We have 53 full time employees and seasonal or casual workers are over 150,” said Mr Kudooko. “The figure will continue to grow as we scale up our operations through growing more bananas, potatoes, maize and citrus.”

Mr Tawanda Mungwari, a man who has been in farming for years, introduced the McCarter family to Middle Sabi.

Potatoes are marketed locally and in cities and towns, while the bananas are for both the local and export markets.

In their first year of harvesting, the banana yields averaged 50 tonnes per hectare.

While the business operations are doing fine, the company has some teething challenges stemming mainly from the advent of the Covid-19, which has affected virtually every business through-out the world.

“Covid-19 precipitated the scaling down of expenditure and putting on hold capital expenditure to meet this challenge,” said Mr Kudooko. “We continue to follow the guidelines from the government in respect of social distancing, but we remain focused on the matters at hand.”

The Government encourages public-private-partnerships for the growth of the economy and to this end, Makata has high hopes for the future in Middle Sabi.

Going forward, Makata wants to be an active participant in growing the economy.

“We will consolidate what we have for now,” said Mr Kudooko. “Going forward, our plans are to extend the area under banana plantation; we also want to establish citrus with our major focus on lemons and avocadoes.”

Beneficiation is also being considered through plans to establish a factory in Chipinge, which can add value to the citrus fruits that are grown in the area, thereby bringing in more foreign currency.

This would enhance Vision 2030 which entails an upper middle income economy.