FROM a makeshift farm school providing tuition for vulnerable children without capacity to pay fees, buying uniforms or stationery, MayPark Primary School in Mashonaland Central Province, is slowly on the path to development thanks to the intervention of First Lady Auxillia Mnangagwa and her Angel of Hope Foundation.

The First Lady has a passion for the development of women, children, the elderly and other vulnerable groups.

Her association with the school begun last year when she paid a year’s fees for all 109 pupils who were enrolled there at the time. 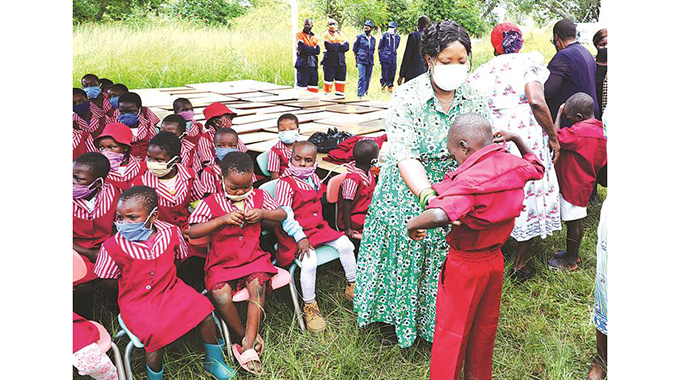 First Lady Auxillia Mnangagwa dresses the pupils in new uniforms she personally sew while others sit on the new furniture at MayPark primary school yesterday.

So challenging is the learning environment at the school, which has only one block with two classrooms where three to four grades conduct lessons in one classroom facing different directions.

The school offers Early Childhood Development (ECD-A) right up to Grade 7 and it was built for children from surrounding farms.

When the First Lady visited the school early last year, she established that pupils had no uniforms, stationery and furniture.

She established a feeding programme to cater for the health and nutritional requirements of the pupils as some walked long distances to and from school.

The First Lady’s feeding programme has seen the enrolment at the school increasing to 130 pupils.

Amai Mnangagwa promised to assist the school and the pupils further, and true to her word, yesterday she lived up to her promise and through her Angel of Hope Foundation delivered desks, chairs, uniforms and stationery for all the 130 pupils which she handed over to the school authorities and the pupils.

It was an emotional and sweet moment when she helped the children put on the new uniforms  and personally handed each of the children stationery that included exercise books, pens, pencils, crayons and rulers. Chalks were also part of the donated items for the teachers to use.

The donated uniforms were personally designed and sewn by the First Lady who has a hands on approach in most things she does.

Amai Mnangagwa also prepared a meal for the children with the assistance of women from the community. She cooked sadza, beef, sugar beans and vegetables to feed the pupils.

In her remarks, the First Lady said she was glad to be associated with children whom she described as the future of the nation.

“It is my pleasure to meet you on this day when we have visited children who are the future of the country. Education is important because it is a heritage for the future,” she said. 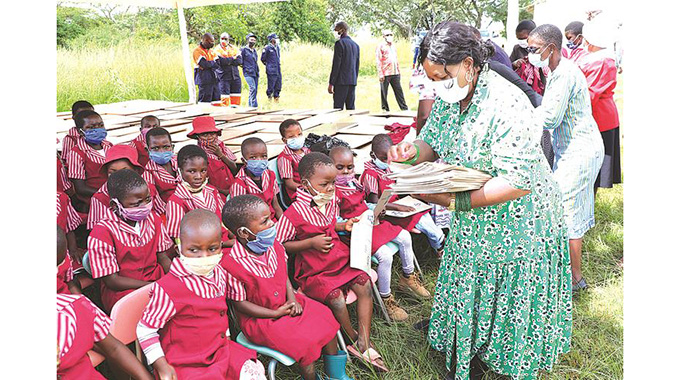 “Every child who went to school and completed his/her studies has a chance of changing their circumstances. I therefore urge us all as parents to encourage them to keep with the zeal to go to school so that they can excel.

“I came here last year and saw that our children did not have uniforms, books and desks which made them write with books over their legs. I have come to see the children because they told me of their desire to go to school.”

The Angel of Hope Foundation’s patron said some children pulled out of school because they did not have uniforms and other consumables.

“This affects their education and their future. The time the child should have pursued education is put to waste because the child will be looking down upon himself/ herself.

“As a mother I have decided to bring uniforms, desks, chairs and stationery to support the education of our children,” she said to applause. 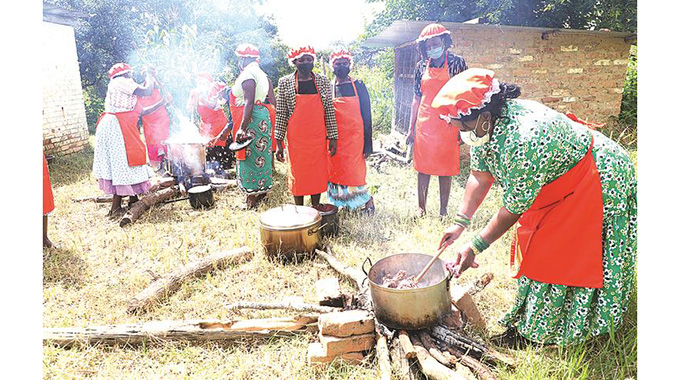 She said in the African culture, every child belonged to the community and not his or her parents alone.

“Since they are our children, we must unite as parents and teachers to raise them on the correct path. At their ages they spend much time at school and these schools should not be about academic studies alone, but also our culture.

“We must be proud of our children and see to it that they are being taught. I urge teachers to be patient in teaching our children to have good morals.”

Amai Mnangagwa said the training of children should not be left to teachers alone and parents must help them with their homework.

She also impressed upon the children to treasure their education as a pathway to a future filled with success.

The First Lady implored parents to prepare traditional, healthy foods for their children’s growth. She further urged women in the community to form groups and start income-generating projects to raise their families.

Home Affairs and Cultural Heritage Minister Kazembe Kazembe, was touched by the First Lady’s efforts to improve the welfare of children.

And to complement her efforts, he donated building material for the construction of another classroom block at the school. 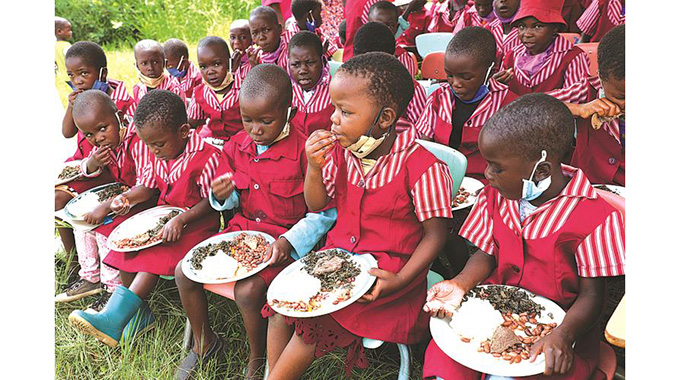 Minister of State for Mashonaland Central Provincial Affairs and Devolution, Monica Mavhunga, said she was humbled by the First Lady’s commitment to charity.

“I am humbled by your commitment to charity and the passion you exhibit countrywide. We also cherish your support in the fight of Covid-19.

“Amai, you are always there to help all your children countrywide and we are seeing your charity work here and contribution to the education sector.

“We are touched by your good gesture. We can’t express our happiness. Just like in Kanyemba you brought development there and we only started running after you. You are our beckon of hope to the vulnerable,” she said.

The school head, Mr Tungamirai Chirima, was excited by the First Lady’s gesture and said yesterday was not the first time she had assisted his school.

“We want to thank her for her love. It did not start here as she has previously paid fees for all the children. She gave us porridge which we prepare for the children as part of her school feeding programme.

“She is giving us so much support. When she introduced the feeding programme, it boosted our enrolment and attentiveness. It also reduced absenteeism because children were now happy to come to school. May God continue to bless her,” said Mr Chirima.

His sentiments were echoed by Provincial Education Director for Mashonaland Central Province, Mrs Naome Chikosha, and PED Mashonaland West Mr Gabriel Mhuma who thanked the First Lady for her intervention.

They urged parents from the surrounding farms to send their children of school going age to school and assured the First Lady of their support.

A parent at the school, Mrs Zvikone Mupedzapasi, said the community was grateful to the First Lady for her benevolence.

“As a community we are grateful to the First Lady for her love. She has dressed our children and the children now have where to sit and write while in class.

“Personally I was stressed that schools were about to be opened while children did not have uniforms or stationery. As a mother she has rested us and leapt to our rescue,” she said.

True to the name of her organisation, the First Lady has been an angel of hope who is devoting time and resources to ensure those in marginalised communities are not forgotten.