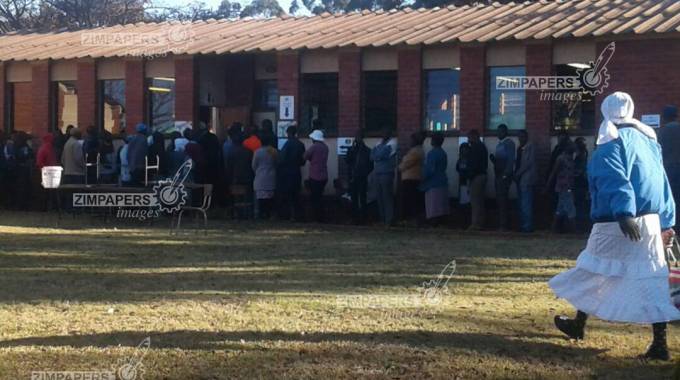 Samantha Chipoyera Herald Reporter
Several people who cast their votes for the first time in the 2018 harmonised elections yesterday have expressed satisfaction in the manner the polls were conducted. A snap survey carried out at most polling stations in and around Harare yesterday revealed that quite a number of voters were casting the ballot for the first time either as a result of reaching the requisite age of 18 or a new realisation that they needed to participate in this country’s future.

Agnes Mangwiro (19), who cast her first ballot yesterday at the University of Zimbabwe polling station, said the process was flawless and took less than five minutes.
She said that she was very excited to vote for the first time.

“I am so excited I voted for the first time. I am a first-year student at this university.
“I voted because I am concerned about my future, I want to have a brighter future than that of my parents, so this vote that I cast today is going to determine what is best for me,” said Mangwiro.

Another first time voter who declined to be named told The Herald that she was proud of her decision to vote in this year’s harmonised elections.

“I am very proud that I voted today. Most of my friends did not register to vote because they think that they are too young to make such decisions.

“I voted because I believe that as the youth we should have a voice in such big events like elections because the future belongs to us. I am quite confident that my vote will make a difference.’’ said the young voter.

Nomsa Ncube (21) described this year’s election as historic since it was the first time Zimbabweans had gone to the polls without former president Robert Mugabe’s name appearing on the ballot paper.

“I cannot believe that I am voting already and I am so excited that we are the first generation to vote without Mr Mugabe since 1980.

“Today is indeed a historic event for me and for the Zimbabweans at large who are voting for the first time in 37 years without former president Mugabe,’’ she said.

Another first time voter, Douglas Nyanzira (34), and his two friends who declined to be identified were among people who queued to cast their first votes.

Nyanzira said he refrained from voting in 2013 after concluding that the elections would not be free and fair.
“This is the first time that I am voting because I felt that the previous elections were not free and fair.

“President Emmerson Mnangagwa made me change my mind after assuring us that this year’s elections would be credible, free and fair,” he said.