Heather Benoy, who was appointed the head of technical education in Zimbabwe soon after independence, died on Christmas Day. 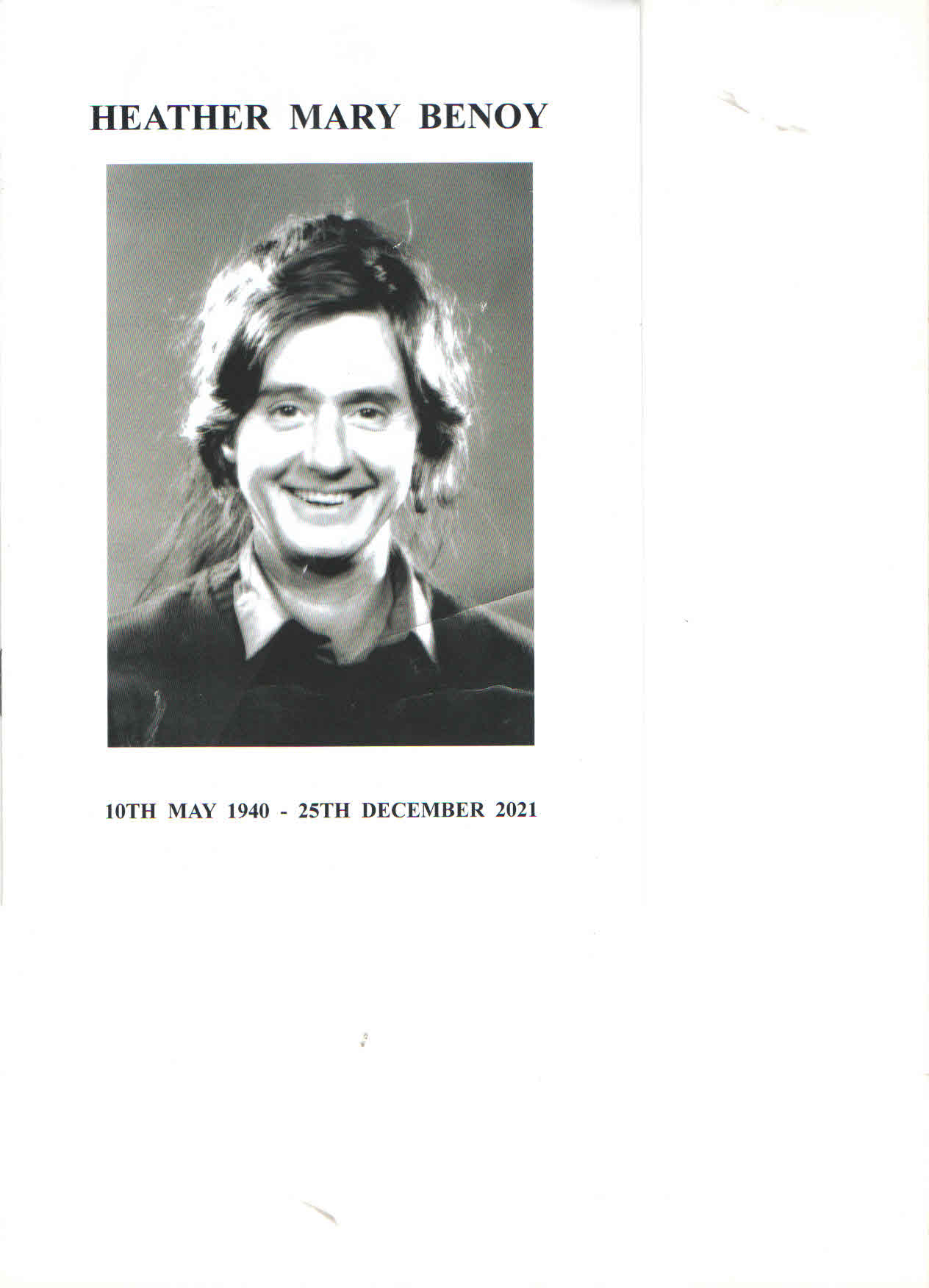 An accomplished musician and playwright as well as producer, she taught in various schools before independence.

Although I first met Heather nearly fifty years ago when she used to drive her blue Mini, which never seemed to have brakes, out to Silveira House, I cannot say that I knew her well. I have seen some posts on the internet which tell her story better than I ever could. What I think my role here today is to try to pick out some traits of her colourful life as vehicles in which we can celebrate her.

Two words come to my mind; ‘restless’ and ‘provocative’ and they were two sides of the same coin. Heather never seemed to be satisfied. ‘The preacher had nothing to say so I put my ear phones on and listed to Beethoven.’ ‘The second violinist was out of tune and spoiled the whole piece.’ I could not easily relax with Heather because I kept feeling I should jump to the defence of her latest target, but I would get nowhere. Like Margaret Thatcher, she ‘was not for turning’.

Yet I knew that her restless criticism was really a search for excellence. She must have been a great teacher. No student could relax in her class and all must have been stretched to the utmost to avoid her withering comments. I know I often found myself reduced to helplessness in her presence. I don’t like conflict and I don’t like crises. Heather thrived on both. In fact, everything seemed to be made into a crisis so that it could be fully relished. I am sure it would have been easy to fix the brakes of her Mini but she never did. She seemed to prefer the adventure. I exaggerate! She was not foolhardy nor did she endanger others by her driving. But she seemed to love living at the edge.

About fifteen years ago there was a ‘Day on John Bradburne’ at 4th St Convent and Heather was one of the speakers. Because Heather was Heather there was a crisis: her dog had to be taken to the vet. Somehow, we did not mind waiting for an hour and Heather duly hurried in. She said two things that stuck in my mind. She recalled the 1960s when she and John used to have long talks, mainly about each other’s poetry and music. Looking back, she felt she was unfair to John as she did most of the talking, he being a good listener. She had not allowed him to speak.

The second thing was more significant. In 1969, when she drove John to Mutemwa, she was startled by his reaction: ‘Damn you Benoy, I have to stay here!’ Heather had difficulty persuading him to come back with her to Salisbury, as it then was, to collect his few things but she often reflected on that scene. She told me only a year or so ago that she was certain John knew at that moment he had to stay and he would be killed there. I do not know if John told anyone at the time but he carried this knowledge to the end of his life. When he came in to bid farewell to John Dove, who was going on home leave in August 1979, he was in a great hurry to get back to Mutemwa where he was killed three weeks later. Heather concluded by saying, ‘Mutemwa made John’. Up till then he had been a much admired but somewhat puzzling eccentric English ‘vagabond.’ He was free to come and go as he wished on his pilgrim way. He had no responsibilities. But at Mutemwa, he had responsibilities, awesome ones. Heather witnessed the scene on his first arrival where the people with leprosy were treated as hardly human. It was no easy job for John to turn Mutemwa round but Heather’s point was Mutemwa also turned John around. It was there that he struggled to bring light where there was darkness. And it was there that he was misunderstood, dismissed from his job, expelled from the camp and had to endure years of rejection which finally ended when he was led away and killed. Heather understood all this. Few of us did. It was Mutemwa that made John the revered and saintly person he became.

We are celebrating this Eucharist for Heather, giving thanks for her life and commending her to God. In doing so we are also celebrating her search for the higher things. She was rooted in her Christian, in her case Catholic, faith but there was much in the ways of her Church that made her uncomfortable – and it was not just the preaching. Her life showed that she was committed to serving others, sometimes the poorest and most marginalised – as in Sudan. It also showed that she yearned for a more direct link between faith and life. She was not at all happy with religion as a comfort zone. She knew there was a cost to the pursuit of the highest ideals and she did not hesitate to accept it.