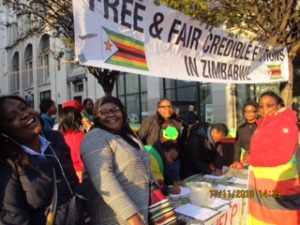 The most reviled / revered British Prime Minister of the past half century has been championed in the pages of the influential London newspaper the Financial Times by none other than Emmerson Mnangagwa.

In the face of fierce opposition, Mrs Thatcher forced through sweeping changes which paved the way for strong economic growth. President Mnangagwa obviously sees himself in the same light. ‘Like Thatcher we are not afraid of taking tough and at times painful decisions’, he writes. ‘As she used to put it, there is no alternative.’

Mnangagwa spoke of the need for spending cuts, new taxes and a drive against corruption. ‘The national budget must be balanced and spending reined in. The government wage bill is unsustainable.’

Like Thatcher, who was in power when Zimbabwe gained independence, Mnangagwa promised privatisation of state-owned enterprises. ‘A large and inefficient public sector cannot be allowed to hold back private enterprise.’ (See: http://www.zimvigil.co.uk/vigil-news/campaign-news/978-zimbabwe-has-no-choice-but-to-embark-on-painful-reforms-.)

That the government needs to make drastic reforms is undisputed. The American economist Steve Hanke, who has closely followed Zimbabwean affairs, says the outcome for the economy was disastrous under what he called the Marxist regime of Mugabe and his Zanu PF accomplices like Mnangagwa. Hanke said that, according to the IMF, Zimbabwe was one of the poorest countries in the world. ‘Measured by real gross domestic product per capita, living standards are now only 78% of what they were when Mugabe assumed power in 1980 . . . Since the land reforms of 2000, the value of farm production has shrunk by 45%.’ (See: https://www.theindependent.co.zw/2018/11/17/zim-remains-in-economic-ditch/.)

Mnangagwa may no longer be the Marxist ideologue suggested by Professor Hanke and economic reform is not the only problem he faces. The sight of two generals brazenly denying that the army was responsible for the deaths of civilians on the streets of Harare on 1st August has been greeted with derision by the outside world, eroding faith in the commission of enquiry into the shootings.

FOR THE RECORD: 28 signed the register.