The Zimbabwe Energy Authority (ZERA) has said the government is intending to introduce a programme for the supply of local currency (ZWL) fuel into the market. This comes as some analysts are saying selling fuel in foreign currency only is one of the drivers of the parallel exchange rates since forex is scarce even at the Reserve Bank of Zimbabwe’s auction system. Pindula News presents ZERA’s statement.

ROLL-OUT OF LOCAL CURRENCY (ZWL) FUEL INTO THE MARKET

The Government intends to roll out a programme for the supply of local currency (ZWL) fuel into the market for the benefit of the following consumer categories: agriculture value chain, public transport, Government Ministries and agencies, Government projects, motoring public and emergency services. The rest of the fuel consumers will continue to be served by oil companies utilising own resources/free funds and selling the same fuel in foreign currency. The local currency fuel, which will be distributed through National Oil Infrastructure Company (NOIC), will be accessed by oil companies who meet the following conditions:

• The company must be a holder of a valid ZERA license.

• In the case of a procurement licensee, the company must have at least three retail sites.

• The company must not have been previously charged/blacklisted for any violation of the law
The operating conditions for the companies involved in the local currency fuel are the following:

• Designated retail sites should sell fuel in ZWL only. Co-mingling of products at a site is strictly forbidden.

• At least 70% of the allocated fuel must be sold through designated retail network and 30% to commercial (non-exporting) customers.

• Companies to designate retail sites and advertise to the public the sites selling fuel in ZWL in both print and electronic media.

• Each participating oil company shall designate one retail site in a provincial capital for dispensing ZWL fuel. • No containers to be filled at sites selling ZWL fuel.

• Participating companies to be denied further fuel uplifts from NOIC depots before reconciling the previous allocation.

• Hefty civil penalties to be applied for failure to account for proper application of ZWL fuel. Interested companies are requested to submit the list of sites to be designated for the local currency fuel programme to ZERA using the following email addresses — licensing@azera.co.zw by 1 pm on Monday, 1 November 2021. 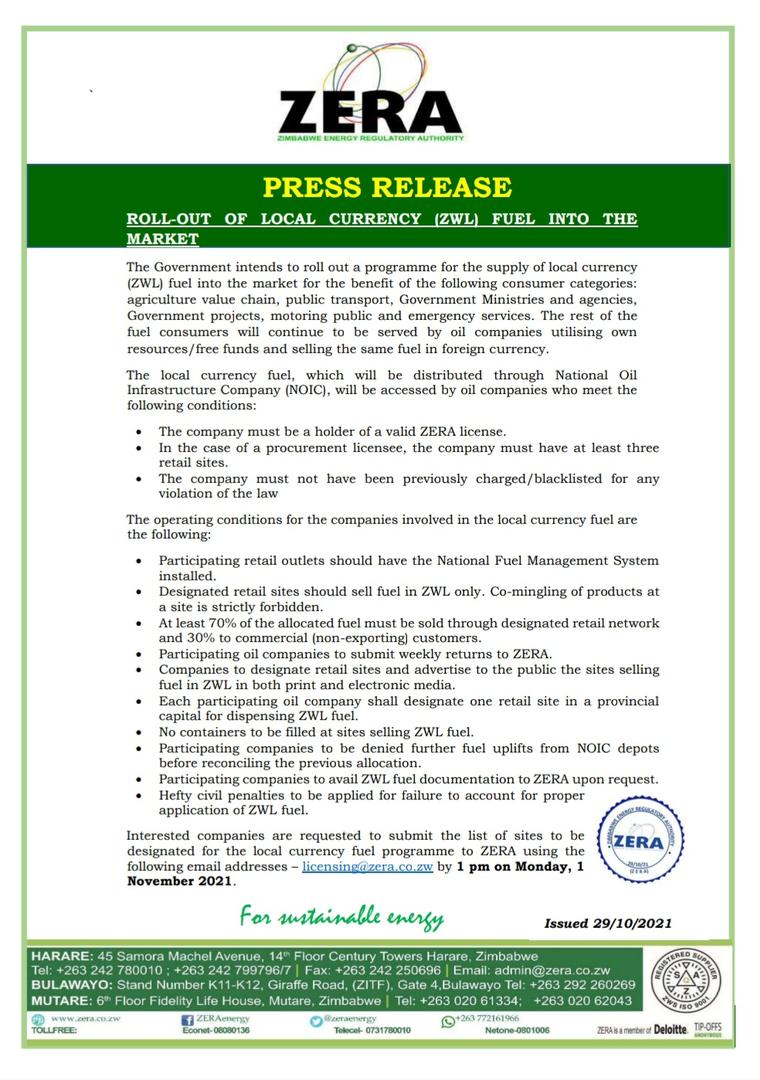