Even MDC Spokesman Obert Gutu wrote out saying “Constantino Guvheya Chiwenga is now the new Minister of Defence,over and above being the Vice President of Zimbabwe. He who owns the piper calls the tune. Res ipsa loquitur… The facts speak for themselves.”

Rtd General Chiwenga now VP and Min of Defence. Are we seeing a Kagame of Southern Africa?

News readers on Friday morning reacted to the just ended swearing in ceremony of VPs claiming that President Emmerson Mnangagwa has given Gen. Constantino Chiwenga too much power by appointing him not only Vice President but also Defence Minister and furthermore War Veterans Minister.

One Emmanuel Chinyama said of Mnangagwa seeing the just ended coup, “all he needs to consolidate power at all cost but this time it will not work, trust me.”

Similar fears were also sounded by a Mnangagwa family member. “What you don’t know is that right now the real President running the show is Chiwenga,” a Mnangagwa nephew who refused to be named told ZimEye.com

Another contributor, Obrian Kavhuru said, “Mnangagwa is not in control, period.”

Has Gen. Chiwenga become more powerful than Mnangagwa as VP plus Minister Of Defence and also Minister Of War Vets (ALL IN ONE)? 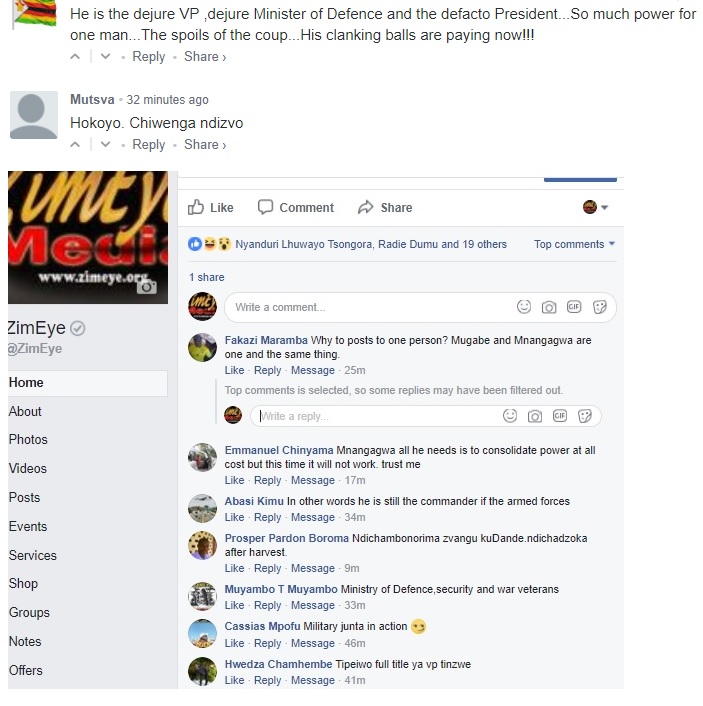 Meanwhile, it was recalled that Gen Chiwenga during the war, occupied the expelled Saviour Kasukuwere’s powerful post of Party Commissar and Mnangagwa has in recent days even publicly referred Chiwenga as such, a position that has been the pivot of all ZANU PF squabbles since independence and that has seen the sudden death of many commissars.