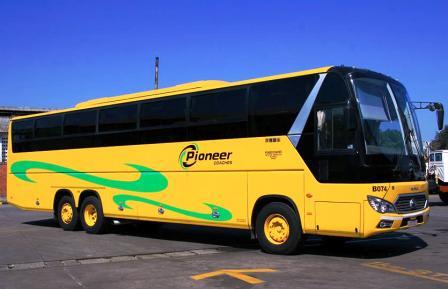 A LOCAL shareholding company of Pioneer Transport has filed an application challenging a decision by the Master of the High Court compelling it to pay its debts in United States dollars.

Lamcent Capital (Pvt) Limited, a 45% shareholder of Pioneer Transport (Pvt)  Limited, filed  an application for a review following a decision by the Master of the High Court, cited as the first respondent in the matter, that the bus company should pay a tax bill amounting to US$359 559,50  for judicial management fees.

Lamcent, represented by Lameck Tarupuwa, wants the court to set aside the Master of the High Court’s decision and allow them to pay the fee in Zimbabwean dollars.

The dispute between Tarupuwa and the judicial managers arose following a Reserve Bank of Zimbabwe exchange control directive of 2019 under Statutory Instrument (SI) 33 of 2019 which converted sums in accounts designated in US dollars into Zimbabwean dollar denominated currency.

Through his lawyers, Manokore Attorneys, Tarupuwa argues that the Master of the High Court was unreasonable and irrational in deciding to denominate the debt in US dollars when SI 33 of 2019 had been put in place.

According to court papers, Pioneer was placed under judicial management by the High Court in 2016 and appointed Wesley Sibanda as the manager, a position taken over by his son Raymond Sibanda and Oliver Mutasa following his death in 2018.

In his application for review, Tarupuwa cited the two co-judicial managers Raymond and Mutasa as the second and third respondents respectively while Pioneer was cited as the fourth respondent.

The judicial managers insist that the amount owed by the company prior to 2019 was in US dollars and demand payment in the same currency while Tarupuwa argues that the SI 33 of 2019 had converted currency denominations and the managers had to be paid their dues in local currency.

In his grounds of review, Tarupuwa argues that the Master of the High Court made his decision with bias towards the co-judicial managers and that he failed to follow the proper procedure in reaching his decision.

“The applicant contends that it was grossly unreasonable and irrational for the first respondent to make the decision to denominate the bill in US dollars,” Tarupuwa stated in the court papers.

“It is common cause that the amounts in question accrued during the period 2017 and 2018 and were being recorded on the fourth respondent’s books of accounts. This is in line with the obligations  placed on the third and second respondents as judicial managers to keep such accounting records and prepare annual financial statements as the company or its directors would have been obliged to keep if it had not been put under judicial management.”

He also accuses the Master of the High Court of failing to award him and Pioneer an opportunity to file their submissions on their views towards the taxation of the bill.

He stated in the court papers that attempts to resolve the matter out of court were in vain, as the co-judicial managers had argued that the Master of the High Court would be reviewing his own work if he considered re-taxing the bill.

“Further, applicant submits that at the time the bill was taxed, Zimbabwe was under lockdown and the office of the Master of the High Court was officially not operational,” Tarupuwa said.

“This lockdown ran effectively from January 2, 2021 to March 2, 2021. The applicant submits that the (Judicial Service Commission) Practise Direction 5 of 2021 directs that first respondent should re-open from March 2, 2021. It therefore leaves one wondering how the bill could have been taxed at the time in question if it was in line with the law at the time.”

The court is yet to make a determination on the application.