News and Press Release in English on Zimbabwe about Agriculture, Food and Nutrition and Drought; published on 3 Oct 2022 by FAO 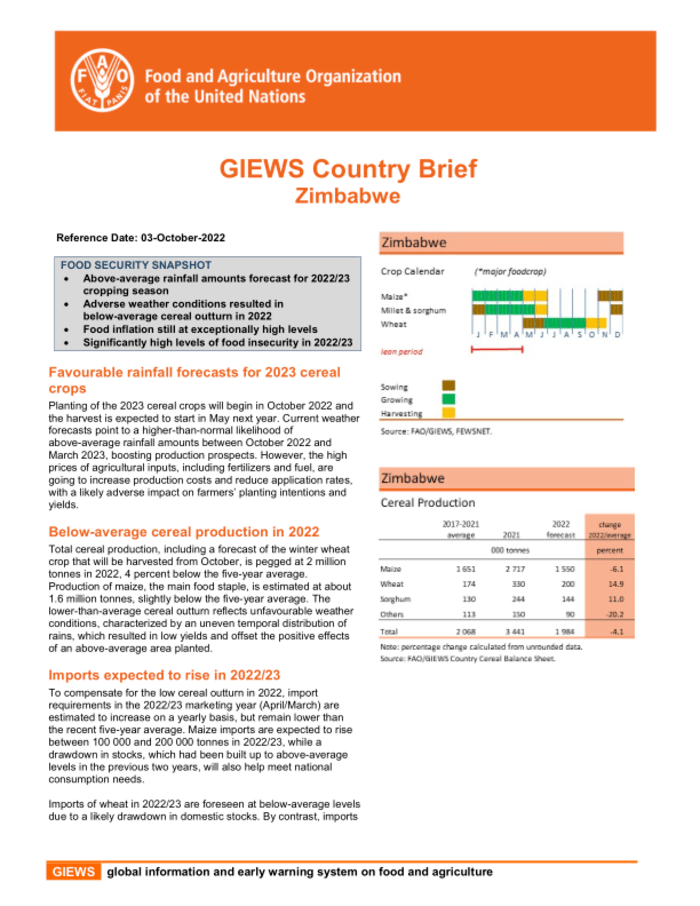 Planting of the 2023 cereal crops will begin in October 2022 and the harvest is expected to start in May next year. Current weather forecasts point to a higher‑than‑normal likelihood of above‑average rainfall amounts between October 2022 and March 2023, boosting production prospects. However, the high prices of agricultural inputs, including fertilizers and fuel, are going to increase production costs and reduce application rates, with a likely adverse impact on farmers’ planting intentions and yields.

Total cereal production, including a forecast of the winter wheat crop that will be harvested from October, is pegged at 2 million tonnes in 2022, 4 percent below the five‑year average. Production of maize, the main food staple, is estimated at about 1.6 million tonnes, slightly below the five‑year average. The lower‑than‑average cereal outturn reflects unfavourable weather conditions, characterized by an uneven temporal distribution of rains, which resulted in low yields and offset the positive effects of an above‑average area planted.

To compensate for the low cereal outturn in 2022, import requirements in the 2022/23 marketing year (April/March) are estimated to increase on a yearly basis, but remain lower than the recent five‑year average. Maize imports are expected to rise between 100 000 and 200 000 tonnes in 2022/23, while a drawdown in stocks, which had been built up to above‑average levels in the previous two years, will also help meet national consumption needs.

Imports of wheat in 2022/23 are foreseen at below‑average levels due to a likely drawdown in domestic stocks. By contrast, imports of rice, which is not produced in significant quantities in the country, are foreseen to rise to a level above the five‑year average, as international prices are comparatively stable.

The annual food inflation rate was estimated at 353 percent in August 2022 and the country has experienced triple‑digit inflation rates since April 2022. The exceptionally steep price increases have been underpinned by the sharp depreciation of the currency and elevated international prices of key food staples and energy.

In the second and third quarters of 2022, the government introduced a number of measures to curb inflationary pressure, raising to the benchmark interest rate and removing of import duties on several key food commodities, including cooking oil, maize meal and rice, for a period of six months from May. These policies contributed to slightly ease the monthly food inflation rate, which was estimated at 14 percent in August compared to 29 percent in July.

According to a recent national assessment, about 3.8 million people are projected to face acute food insecurity during the upcoming peak lean season (January–March 2023). This figure is 30 percent higher compared to the corresponding period in 2022. The worsening conditions reflect predominately the persisting macroeconomic challenges and high food prices.