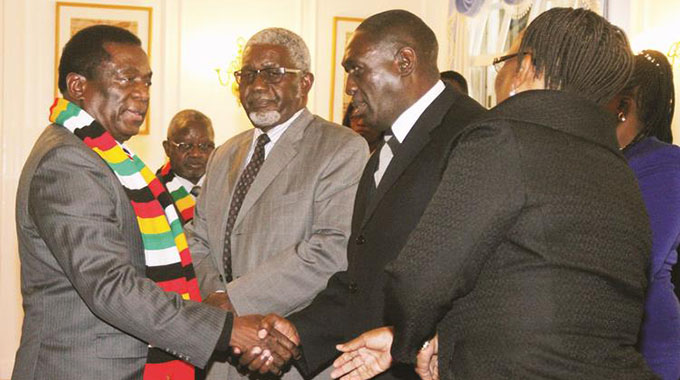 Speaking after the ceremony, Secretary for Justice, Legal and Parliamentary Affairs Mrs Virginia Mabiza said the tribunal was expected to complete its investigations and make the necessary findings in the next four months.
“The tribunal is supposed to deliver within four months from the date of appointment, which is today.

“In the next four months, we should be able to know whether the PG will retain his office or will be removed from office,” she said.

Mrs Mabiza said the secretariat, which provides the necessary support to the Tribunal, will be headed by a director from her ministry.

“The secretariat will be headed by a director from the Ministry of Justice, Legal and Parliamentary Affairs. Our duty as the secretariat is to make provisions for the Tribunal to operate efficiently. We also provide evidence and see to it that the matter is presented well before the commission,” said Mrs Mabiza.

Mrs Mabiza said the President was yet to appoint the Acting PG.
“Acting PG will be announced in due course, not later than Friday,” she said.
The three members of the Tribunal are renowned lawyers who have excelled in different areas of the practice of law.

“The chairperson is a veteran judge who retired last year after serving at the High Court bench for years. Mrs Chingeya-Mandizira is a lawyer of repute who was part of the secretariat during another Tribunal set years back to decide on former Attorney-General Mr Sobuza Gula-Ndebele.

“Adv Nzombe is a seasoned lawyer and a retired senior police officer. He served as head of legal services in the police force for many years and he has the necessary experience for the task,” said Mrs Mabiza.

Mrs Mabiza said Government was determined to fight corruption and that whoever is appointed to take over from Adv Goba as Acting PG must prioritise prosecution of high profile graft cases.

“Adv Goba was suspended on allegations of failing to prosecute high profile cases, among other charges.
“Whoever will take over the reign, must prioritise the fight against corruption, especially prosecution of high-profile cases,” said Mrs Mabiza.

Last week President Mnangagwa suspended Adv Goba from office, to pave way for an investigation into his suitability to continue holding office.

The Tribunal will investigate the PG on the charges of failing to prosecute high profile graft cases, travelling without Cabinet approval, using abusive language, general abuse of office among others.

The suspension followed recommendations by the Judicial Service Commission (JSC) to embark on a process leading to the removal of the PG from office in terms of Section 187 of the Constitution of Zimbabwe.

President Mnangagwa has declared zero tolerance on corruption and the investigating arms of the State have since investigated high profile cases of graft.

The matters are now ready for prosecution but the PG stands accused of failing to play his part to prosecute the suspects.
Government has since complained of the alleged incompetence or inefficiency of the National Prosecuting Authority, a development6 that resulted in the setting up of a special prosecuting section within the office of the President.

The police and the Anti-Corruption Commission have since completed corruption investigations but no prosecutions were being conducted.

Adv Goba was sworn in as the country’s substantive head of prosecutions in December last year.
His appointment was firstly revoked by former head of State Mr Robert Mugabe last year but the new dispensation reinstated him.

Adv Goba replaced former PG Mr Johannes Tomana, who was fired for incompetence and misconduct. A disciplinary tribunal chaired by Retired High Court judge Justice Moses Chinhengo found him guilty of a host of charges and recommended his removal from office.