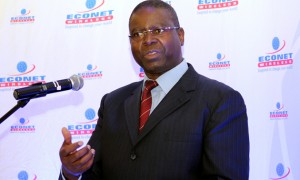 PRESIDENT Robert Mugabe’s government says it will not back away from its telecommunications infrastructure sharing policy.

Responding to questions over the infrastructure sharing issue at a mobile money conference in Harare last week, Postal and Telecommunications Regulatory Authority of Zimbabwe director general, Gift Machengete, said the new policy would cut operators’ costs by 15 to 30 percent and reduce outlays by up to 60 percent.

“We are saying it’s better to share infrastructure because there’s no point in duplication and the resources can be diverted to other important issues. For example, it doesn’t make sense to have three towers on one hilltop except to make the hill ugly,” he said.
“The only issue to be discussed is about sharing on a commercial basis. But no operator will be allowed to refuse to share if there are no reasonable reasons,” Machengete added.

According to the International Telecommunications Union (ITU), sharing mobile infrastructure is an alternative that lowers the cost of network deployment, especially in rural areas or marginal markets.
The ITU notes that mobile infrastructure sharing may also stimulate migration to new technologies and the deployment of mobile broadband. It may also enhance competition between mobile operators and service providers, when safeguards are used to prevent anti-competitive behaviour.

Telecommunication infrastructure sharing is common in countries such as United Kingdom, Spain, Canada, Brazil, Malaysia, India and Jordan among others.

However, telecommunications experts said Zimbabwe’s legislation was tantamount to compulsory acquisition of infrastructure from one operator who has chosen to invest in infrastructure, for the benefit of another that chose not to invest.

Econet Wireless Zimbabwe, which has invested over $1,2 billion on infrastructure since 2009 and has been accused by government of refusing to share its infrastructure, said it was not against the proposed arrangement as long as it was commercially viable.

Econet chief executive officer, Douglas Mboweni, said his company’s offer to share infrastructure in 1998 was rejected by its competitors, who, at the time, viewed possession of infrastructure as a competitive tool.

“Econet was the last entrant in the telecoms market and by the time we came to the telecoms market, other players were already in the market for about two years. When we came in, we were the first proponent of infrastructure sharing and we said ‘guys, instead of duplicating infrastructure, let’s share what’s available’,” Mboweni told delegates at the Institute of Chartered Accountants in Zimbabwe conference last month.

“At that particular time when we approached our colleagues, there was a perception that infrastructure was a competitive tool and there was rejection and we were told ‘if you want infrastructure, develop your own’, which we did,” he said.

Mboweni said Econet, which has become the country’s largest mobile telecommunication firm with over 10 million subscribers, has adopted a very simple model under which it would share infrastructure on an equitable basis.

Econet is currently sharing infrastructure with Telecel Zimbabwe on a one-for-one basis.