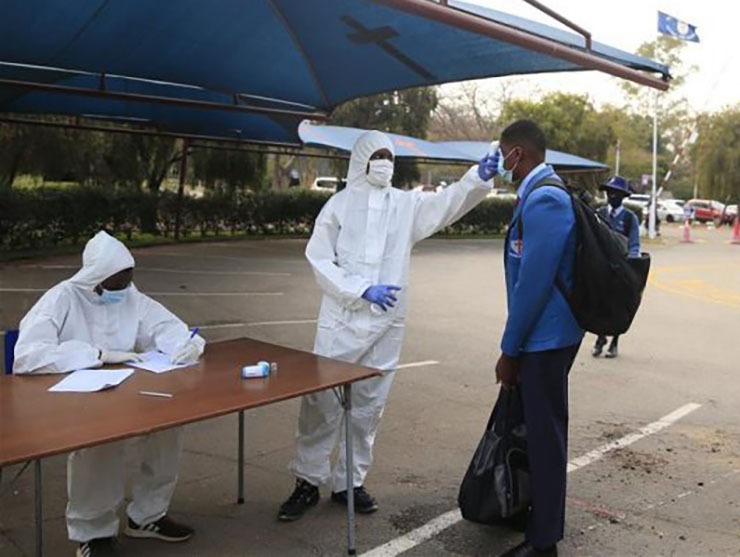 BY MIRIAM MANGWAYA
THE Health and Child Care ministry has resolved to cordon off boarding schools to curb the surge in COVID-19 cases within the learning institutions across the country.

Situational reports released by the Health ministry show that schools currently account for the majority of the COVID-19 cases recorded daily.

On Thursday, of the 330 new cases reported, 65% were recorded in schools.

As of Thursday, there were 1 281 schoolchildren and 131 teachers who had tested positive for COVID-19 across the country, according to the Health ministry.

In a statement yesterday, the Health ministry, however, said the situation was under control, adding that it had strengthened control measures, including intensifying vaccination of the eligible population in schools.

Under the new measures, parents will not be allowed to visit their children in boarding facilities.

“These bulks of the cases are being reported mainly from boarding secondary schools across the country through the enhanced surveillance mounted by the ministry in collaboration with the Ministry of Primary and Secondary Education using the joint operational plan for the coordinated prevention and management of the COVID-19 pandemic at all learning institutions in the country,” the Health ministry said.

“The ministry wishes to assure the nation and the affected parents that measures are being taken to safeguard the safety and health of the affected learners. The following mitigation measures have been put in place. Most of the reported cases have been mild and not requiring hospitalisation and no fatalities have been reported.”

Government said it would increase COVID-19 testing facilities of all suspected cases on-site, enhance isolation and management of all positive cases at the affected schools, and also quarantine all learners that would have been exposed to the virus at their schools.

Information minister Monica Mutsvangwa announced during a post-Cabinet media briefing on Tuesday that the cases being recorded in schools were insignificant to warrant schools closure.

However, findings of investigations conducted by the Amalgamated Rural Teachers Union of Zimbabwe (Artuz) on adherence of schools to government set standard operating procedures during the pandemic show that schools were incapacitated to adhere to the guidelines.

In the report, which was released yesterday, Artuz said there was a 10% drop in safety of school environments since the reopening of schools on August 23, 2021 in comparison with the previous terms.

“The outcome of the Artuz investigation reflected that all sampled schools remain COVID-19 danger zones because of shortages of required resources to reduce the spread of the pandemic disease, unavailability of COVID-19 test kits in schools and inadequate supply of vaccines in communities surrounding schools,” Artuz said in the report.

“The investigation observations reflected that there is a 10% drop in the percentage safety of school environments since the reopening of schools on August 23, and September 6, 2021 in comparison with the state of safety in the previous terms across the nation.”

Teachers unions said schools had limited testing capacities, which raised fears that the figures of the actual pupils and learners who were infected by the virus were higher than those reported.

They warned that the situation could get worse and possibly drive a fourth COVID-19 wave in the country.

“The problem of COVID-19 in schools should be addressed holistically. Banning movement in boarding schools is a temporary measure. It appears like the government is shooting itself in the foot. How are the pupils going to carry out the Continuous Assessment Learning Activities if they have been locked in schools? Schools were never prepared to reopen, which is evidenced by the inconsistencies in policies on the problem at hand.”

Zimbabwe National Teachers Union chief executive officer Manuel Nyawo said banning movements at boarding schools would not resolve the crisis because a majority of them were recording COVID-19 cases.

“The government should develop a culture of consulting stakeholders before imposing decisions,” he said.

“It must have consulted school authorities, parents and other relevant stakeholders on the best way to deal with the crisis in school. Even if it bans movement at boarding schools, the day schools, which have the majority of the scholars, will still be exposed to the risk of contracting COVID-19. Government  must not keep the boarding pupils hostage to address the problem.”