Elita Chikwati Senior Reporter
Government has frozen tuition fee increases in public schools and warned that it will de-register private schools that charge fees in foreign currency “directly or indirectly.”

In a statement yesterday, Acting Minister for Primary and Secondary Education Professor Amon Murwira said boarding schools will be allowed to increase boarding fees and levies, provided 20 percent of parents agree and the proposal is approved by the ministry.

This comes barely a week after President Mnangagwa told residents of Kuwadzana, Harare, that Government would not sanction school fees increases for public schools.

Disciplinary action will be taken against public schools that charge fees in foreign currency or increase tuition fees. Prof Murwira said the Government had no control over boarding fees and levies as they were open to market forces.

“The Ministry of Primary and Secondary Education would like to confirm that there will be no tuition fee increases in public schools. Provincial education directors, district schools inspectors and heads of public schools should stand guided by the circular to the same effect which has been dispatched to them. Anyone found transgressing this directive will face disciplinary action.

“Boarding fees and food fees are subject to market forces, therefore, that one will be charged reasonably. They have been given guidelines on how to proceed with boarding fees.”

The announcement followed concerns that some schools were increasing fees so they could cater for textbooks, but Prof Murwira said the ministry had a budget of $8 billion to cater for that.

“Government is investing a lot to move towards free basic education as per Constitution. This is why the ministry is given such a budget.

“It is important to note that public schools are not funded from tuition fees, but they are also funded from the taxpayers’ money and from Treasury allocation. When we do not allow increases, if there is a gap there is a way we are going to fill it as a ministry,” he said.

Prof Murwira said the Government was doing everything to ensure Zimbabweans had access to education, adding that the highest vote in the National Budget was for education.

“Boarding fees involves groceries. The ministry does not own a shop and therefore schools are subjected to expenses that occur on the market. This is why there has to be a meeting among the parents which determines the level of boarding fees.

“Government is in control of the tuition fees because that is the service we give,” he said.

On free basic education, Prof Murwira said the facility depended on the availability of resources. 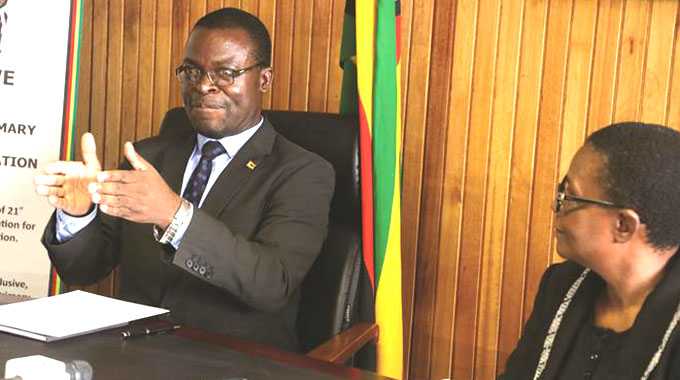 “The Constitution is very clear that this is subject to availability of resources. We are working hard towards that,” he said.

The ministry’s Permanent Secretary, Mrs Tumisang Thabela said the Government had started moving towards the gradual provision of free education.

On boarding fees, she said a circular that stipulated the requirements for schools to increase boarding fees was sent to all schools.

“A circular was sent to all schools stipulating how parents meet, look at their expenses and their surroundings, and agree on a fee they think can feed their children and send it to the ministry for approval.

“That circular stipulates that they have to send their audited statements so we are assured that money has been used correctly. They (schools) have to show us they had a parent assembly where more than 20 percent were attending that meeting.

“It has to show us that register of those parents is attached and is authentic. Once our team is convinced that it is a fair request, approval is done,” she said.