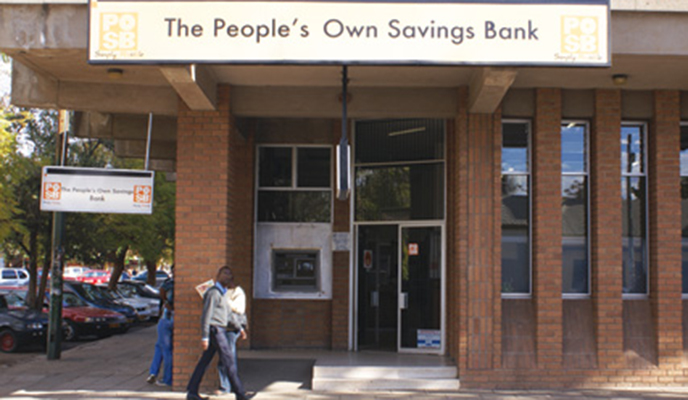 THE People’s Own Savings Bank (POSB) will now be going public or be partially privatised through a private placement after government, the sole shareholder, approved a plan to carry out either of the transactions in a government gazette.

The savings bank has received the green light to engage a consultant to provide consultancy services for the transaction intended to raise new capital.

In the half-year period to June 30, 2018, chairperson Mathilda Dzumbunu disclosed that POSB was looking to raise $100 million by 2020.

A notice of the decision was published in a government gazette of September 28, 2018.

POSB has invited eligible consultants to submit bids to “carry out the financial, legal and operational due diligence of the bank; undertake valuation of the bank; determine the optimal requirements of the bank and identify/recommend possible option(s) for its partial privatisation; develop guidelines and roadmap for implementing private placement and/or initial public offering (IPO, as appropriate; prepare the information memorandum, prospectus and marketing material to be used in the fundraising process and all other requisite documentation for the transaction; assist in the bidding process for the engagement of the investor(s) and advise on all matters relating to the partial privatisation of the bank.”

Cabinet passed a resolution to restructure 47 parastatals and State-owned enterprises (SoEs) on April 10, 2018, which will see some being privatised, partially privatised or merged and others being liquidated or merged into ministerial departments.

POSB, one of the few SoEs operating viable businesses and actually reporting a profit, is among the 13 State entities earmarked for partial privatisation.

In the half-year period to June 30, 2018, the savings bank reported that shareholders’ funds increased by 6% to $57,71 million from $54,45 million recorded in December 2017, mainly attributed to organic growth.

During the same period, government recapitalised the bank with $1,92 million which was equivalent to the dividend declared.

From a policy perspective, POSB is partially being shed off from the government balance sheet to streamline government investments by rolling back from non-strategic entities.
An agglomeration of other SoEs is a drag on the fiscus through fiscal loans and grants.

From a commercial perspective, the bank is being repositioned for growth through fresh capital injection and a new strategic direction.

The bank changed its name to People’s Own Savings Bank in 2001 through an Act of Parliament, after 97 years of operating as a postal bank.

The planned equity transaction could see the bank trading as a commercial bank.

POSB chief executive officer Admore Kandlela, in emailed responses to this paper on Monday, said the partial privatisation of POSB was meant to enhance capacity of the bank to support the productive sectors of the economy, among other aims.

“The partial privatisation is meant to enhance the capacity of the bank to underwrite more business to the productive sectors, widen frontiers for financial inclusion through targeting the informal sectors and unbanked segments of the market as well as access expertise and technology to improve the operations of the bank,” Kandlela said.

“Basically the bank requires investors with the same strategic intent in order to achieve the mentioned objectives. This will be determined in due course depending on POSB valuation and the model of partial privatisation adopted. It is too early to tell. The bank has just advertised for expressions of interest for potential transaction advisors to come on board.”

Kandlela did not specify how much capital POSB is seeking to raise from the IPO.