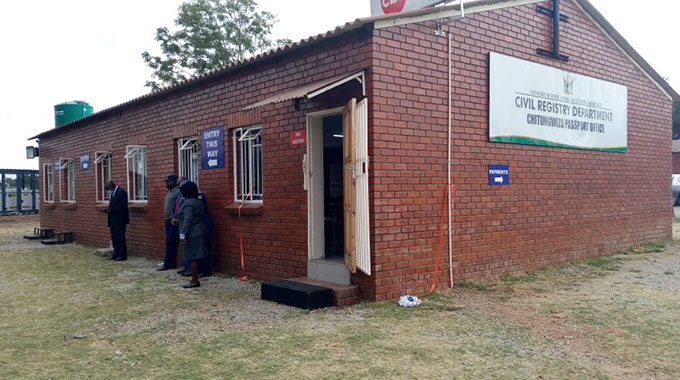 BY TAFADZWA KACHIKO
GOVERNMENT yesterday opened an e-passport biometric centre at Chitungwiza Passport Office, the third such facility after the one in Harare and Bulawayo.

“The process of rolling out the programme to the remaining eight provincial offices, including districts such as Murewa, Beitbridge, Zvishavane and Hwange is currently underway,” Nhepera said.

“Suffice to underscore that Chitungwiza has again scored a first in my ministry’s drive to cascade the issuance of passports to district offices.”

Section 35 (3) of the Constitution states every citizen is entitled to rights and benefits that include passports and other travel documents, birth certificates and other identity documents issued by the State.

“The ministry through the Civil Registry Department has brought e-passport services to Chitungwiza district in recognition of its position as the third largest urban settlement in the country in terms of population size. The availability of this service is bound to benefit surrounding communities including Stoneridge, Hopley, Seke, Mahusekwa and Beatrice among others,” Machiri said.

Acting Chitungwiza mayor Kiven Mutimbanyoka said: “We are so proud that the department has seen it fit to launch this here.”