The government is considering requests by players in the oil industry who are seeking authority to sell fuel in foreign currency, the industry regulator has said. 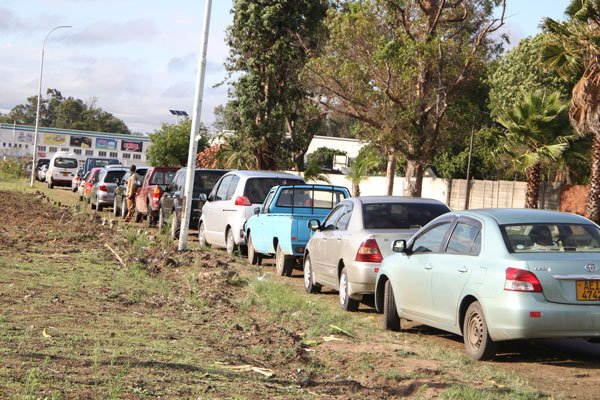 Fuel shortages have intensified in recent weeks leading to debate over the sustainability of continuing to have the imported product sold in bond notes and the real-time gross settlement (RTGS) system or electronic dollars.

Officially bond notes are pegged at par with the greenback, but the reality on the ground is that the bond note trades at 3:1 to the US dollar.

The anomaly has resulted in operators failing to restock as foreign suppliers require payment in US dollars.

Zimbabwe Energy Regulatory Authority (Zera) acting CEO Eddington Mazambani disclosed that proposals had been made to the Energy ministry and were still under consideration.

Mazambani appeared before the Joel Gabbuza-led Parliamentary Portfolio Committee on Energy to speak about the fuel situation in the country.

He said the proposal to sell in US dollars had not yet been given a nod, adding however that it was not reasonable for ordinary Zimbabweans who earned their money in RTGS to buy fuel in forex.

“There has been a proposal that some fuel service stations should sell it in forex, and one of the major players in the oil industry, Zuva, has already piloted the project at two service stations (Zuva Victoria Falls and Zuva Groombridge),” Mazambani said.

“We have already sent a proposal to the Ministry of Energy to consider more players to sell fuel in foreign currency so that we ease the pressure on the Reserve Bank of Zimbabwe (RBZ) in terms of allocating foreign currency for the procurement of fuel.”

Mazambani said there was need to ensure that the fuel purchased from the RBZ facility was not abused to the extent it ended up being sold in US dollars.

“Selling fuel in forex is not sustainable. We have to take into account the vulnerable members of our society. I think the solution to this fuel issue is much bigger,” he said.

Kuwadzana East MP Chalton Hwende said designating fuel stations to sell in forex would have detrimental effects on the majority of the population, who earn salaries in RTGS.

Mazambani boss said the fuel sold in US dollars would be bought using foreign currency account swipe cards, and not cash in order to put reconciliatory mechanisms to differentiate between the fuel purchased through the RBZ facility from the fuel procured by the fuel companies.

MPs said customers were being short-changed at fuel stations where priority was being given to card holders, while those paying through electronic transactions were turned away.

“The cards are an internal arrangement whereby card holders would have paid in advance and garages would have taken people’s money upfront,” Mazambani said.

Godfrey Ncube, the Petrotrade chief executive, added: “We have a deliberate policy because we have customers who pay in advance, and we have a small percentage of residual fuel, which we leave in tanks for card and coupon customers.”

For support to farmers, Ncube said they had engaged Agribank and installed fuel tanks at some farms.

Chipinge South MP Enock Porusingazi suggested that given the serious fuel shortages in the country, consideration should be taken to go 100% ethanol to E100. Currently, the country is on E15. Countries like Brazil are on E100.

Mazambani said Zera at one time engaged Americans to do a study on whether the country could go E100.

“We got technical advice that of the fleet that we have in the country, we can only go to 10% of ethanol blend,” he said.

“There are very few vehicles in Zimbabwe that can take up to E80, and those are vehicles like the Jeep Cherokee.

“With all other cars, we will end up having very serious technical problems if we move to E100. We will have serious breakdowns.”

Newer Post
Economy to take centre stage at Conference
Older Post
No thanks! I’d rather go without!