A NATIONAL CAUSE . . . Businessman Eddie Chivero (with dreadlocks) shakes hands with Bulawayo Mayor, Solomon Mguni, who was accompanied by Chamber Secretary Sikhangele Zhou and Director of Housing and Community Services Dictor Khumalo, at a function at Bulawayo’s City Hall yesterday where the former Zimbabwe National Soccer Supporters leader presented 100 bags of cement and a refrigerator, on behalf of ex-Premier Soccer League fixtures secretary, Beadle Musa Gwasira, to be used in the renovation of Barbourfields

GOVERNMENT has released $13 million to be used for refurbishing parts of Barbourfields to ensure the stadium is ready to pass a CAF inspection and host the Warriors’ 2021 AFCON qualifier against the Desert Foxes of Algeria at the end of this month.

The Bulawayo City Council need $58 million to give Barbourfields a full facelift to meet all CAF requirements to host international matches without having to worry about CAF inspectors raising red flags.

Bulawayo City Council officials said the release of the $13 million grant by the Government, through the Ministry of Local Government and Public Works, will address “short-to-medium remedial works” at Barbourfields. 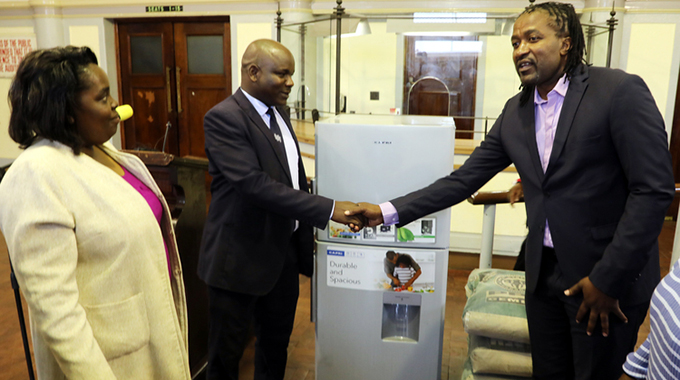 Work should also be done on the stadium’s floodlighting system and a media tribune.

CAF last week revoked Barbourfields’ temporary clearance to stage international football matches and this left ZIFA facing the possibility of hosting the Warriors’ 2021 AFCON qualifier against African champions, Algeria, in one of the neighbouring countries.

But, with the Government moving in to rescue an embarrassing situation for domestic football, where both the Warriors and national Under-20 women’s team faced the sad reality of playing their home matches in neighbouring countries, BCC are now determined to move “mountains” to get Barbourfields ready.

A team of workers has been dispatched to Barbourfields as council prepares for the “real work” to start.

A Government contractor, who will work hand-in-hand with the local authority, was expected to meet BCC director of housing and community services, Dictor Khumalo, yesterday.

Yesterday, former PSL fixtures secretary, Beadle Musa Gwasira, set the tone for the nation to fully back the Government, and the BCC, in their renovation of Barbourfields, by donating 100 bags of cement and a refrigerator to be used in the stadium’s doping room.

Gwasira, who used to own former PSL club Lengthens, said he was only trying to make a difference, as a proud citizen.

His donation was handed over to BCC officials by former Zimbabwe National Soccer Supporters Association Southern Region leader, Eddie Chivero, at a function in the City of Kings yesterday.

Herentals Group of Colleges, who own Harare Premiership side Herentals, also committed themselves, at the same function, to renovate the dressing rooms at Barbourfields, which were also condemned by the CAF inspectors.

Mguni commended Gwasira and Herentals’ gesture, encouraging more partners to come on board.

“I’m pleased to say that the Ministry of Local Government (and) Public Works has confirmed the release of a $13 million grant, which we had applied for, for remedial works at Barbourfields Stadium,” said Bulawayo Mayor Solomon Mguni.

“In addition, the ministry has procured a contractor, who will work on Barbourfields and National Sports stadia.

‘‘The contractor will start as soon as possible in preparation for the next inspection by CAF and the international match. I’m advised the contractor should be in Bulawayo this (yesterday) afternoon.’’

“As you can see, it’s not that we’ve not been doing anything while waiting for the Government grant. We have been working on improving the pitch condition so that the surface is even,’’ said Khumalo.

‘‘We’ve also been working on internal renovations. Most of the things needed require procurement and fitting. Except the bucket seats, and floodlights which we categorised under long-term projects, the rest of the requirements will be addressed with speed to make the venue playable for the Algeria game.’’

Council has already identified a supplier to replace the steel goalposts with aluminium ones and the company, which was not named, will provide the movable aluminium goalposts ahead of the next CAF inspection expected before March 20.

Two of the 12 showers in each of the teams’ dressing rooms will be destroyed to accommodate three toilets as required by CAF.

Lockers will also be added to the dressing rooms as well as the referees’ changing rooms. If BCC move with speed, and acquire equipment early, remedial work at Barbourfields should be done by March 20, with floodlights and bucket seats remaining as the only outstanding requirements.