THE government will secure the area around the Victoria Falls gorge to avoid repeats of tragic incidents similar to the one that killed a Harare man over the festive season.

This comes as search units that include ZimParks rangers, police and the military are battling to retrieve the body of Roy George Tinashe Dikinya –who plunged to his death at the gorge while taking pictures with a friend.

His  body has since been located some 100m at the falls’ Danger Point. 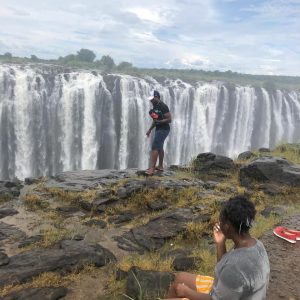 However, the authorities are battling to retrieve the 40-year-old’s body due to the precarious terrain.

In his condolence message to the Dikinya family, Tourism minister Mangaliso Ndhlovu said the government would be securing the viewing site at the falls to prevent similar incidents in future.

“On behalf of the ministry and government of Zimbabwe, I wish to extend my sincere condolences to the Dikinya family following the tragic incident which saw…Roy slip and fall down in the Victoria Falls gorge.

“This is a rare, tragic and unfortunate incident to be witnessed at the mighty Victoria Falls.

“All necessary precautions will be taken to guard against recurrence of such an unfortunate incident.

“Indeed, the Victoria Falls, like other tourist resorts, should be a place for relaxation and merry making. This isolated incident is therefore sincerely regretted,” Ndhlovu said last night.

Ndhlovu also revealed how delicate and difficult the process to retrieve Dikinya’s body was as he gave progress made to date.

“I want to acknowledge the efforts by the Zimbabwe Republic Police, the Zimbabwe Defence Forces and Zimparks assisted by private sector players in Victoria Falls to try to retrieve the remains which we believe are of the deceased.

“However, the precarious location of the remains have hampered progress. We remain determined to see decent closure to this tragic incident, and in this respect wish to update that we have now activated the civil protection structures.

“Based on the current efforts, we believe we should be able to get the suitable equipment which, based on expert assessment, only one mine has in Matabeleland South, (to be brought) on site by tomorrow (today).

“I appeal to any other company which may have suitable equipment to come forward and assist,” Ndhlovu said.

Dikinya’s death happened at a time when the Victoria Falls is experiencing heavy inflows from the Zambezi River owing to the recent local and regional rains.

In April 2020 when the flow into Victoria Falls was low, Elmon Muleya, 29, from Victoria Falls town cheated death after he fell into a gorge in the Zambezi River and a boulder landed on him, crushing both legs.

In 2005, a tourist from Johannesburg died on New Year’s Eve when he fell 40m down a rock face at the Victoria Falls while trying to recover spectacles he had dropped.