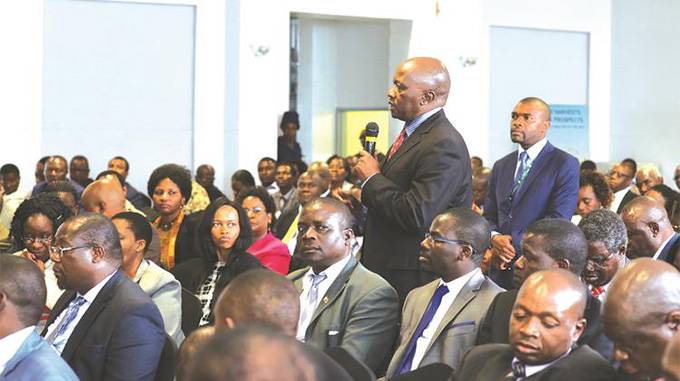 Africa Moyo Senior Business Reporter
Government is set to restructure the Agricultural Marketing Authority (AMA), as it seeks to resolve the challenges confronting farmers in marketing their produce.

This was announced by both President Emmerson Mnangagwa and Vice President Constantino Chiwenga yesterday in separate addresses during the 6th Annual National Agribusiness Conference held concurrently with the Harare Agricultural Show.

The intervention by Government comes at a time when farmers and their organisations have called for the overhauling of AMA, on claims that it has repeatedly failed to solve the chaotic marketing of various crops particularly cotton.

AMA was set up by Government primarily to promote agricultural production of strategic crops such as tobacco, cotton, sugar, soya beans and barley.

However, there is consensus among players in the agricultural sector that AMA has failed to represent their interests, particularly marketing produce, and should therefore be restructured.

Said President Mnangagwa: “My Government will soon be restructuring the Agricultural Marketing Authority (AMA) to make it more responsive to address these marketing gaps within the sector . . . and deal decisively with side marketing. Going forward, it will be equally important to address the export market for our agricultural produce.”

VP Chiwenga yesterday echoed the same sentiments saying farming is a business, “and one key aspect that makes any business successful is availability and accessibility of properly functioning markets”.

For that reason, said VP Chiwenga, Zimbabwe needs to be connected through re-engagement and engagement of previous and new markets. “For instance, some of our farmers who are into horticulture; whose products have a short shelf life, end up losing incomes or selling their produce at low prices to unscrupulous middlemen,” said VP Chiwenga.

“In other instances, we have heard of farmers discounting growing flowers due to lack of readily accessible foreign markets as well as failure to meet the quality standards. For that reason, Government will be restructuring the Agricultural Marketing Authority to address the marketing challenges currently being experienced by the farmers.”

On its part, Government plans to explore more export markets for local agricultural products through the country’s premier export promotion agency, ZimTrade. Already, ZimTrade is exposing local farmers to export markets and has also roped in the services of Netherlands – based experts from an organisation called PUM.

VP Chiwenga said with the help of the re-engagement drive that the new dispensation has embarked on, there is high optimism that more foreign markets shall be accessible for local agricultural products.

ZimTrade acting chief executive officer Allan Majuru, says there is a huge market for agricultural products in Sadc, Comesa and the European Union which can be exploited by local farmers.

AMA came under stinging criticism from farmers particularly this year after revelations that the cotton crop contracted by Government was being threatened by side-marketing.

Unscrupulous private buyers were ambushing farmers, promising them slightly more money for their cotton, despite the fact that Government had funded more than 90 percent of cotton production under the Presidential Input Support Scheme.

Government, through the Cotton Company of Zimbabwe (Cottco), ploughed $62 million to support farmers last year, but AMA could not shield farmers from marauding private players who wanted to buy cotton whose growing they didn’t sponsor.