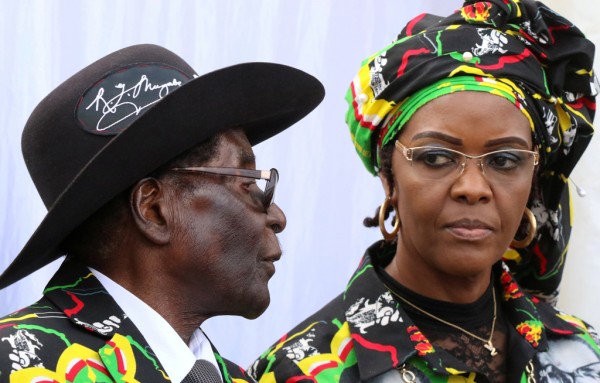 South African police say they still want her in court to answer allegations of assault on a model.

Zimbabwe’s government has sought diplomatic immunity for President Robert Mugabe’s wife in the assault case against her in South Africa, South Africa’s police ministry has said.

Grace Mugabe was still in South Africa, it added, contradicting earlier reports that she had returned to Zimbabwe.

A 20-year-old South African model has accused Mrs Mugabe of assaulting her at a hotel in Johannesburg on Sunday.

Police expected Mrs Mugabe, 52, to turn herself in on Tuesday, but she did not.

Zimbabwe’s government had invoked “diplomatic immunity cover” for her, the ministry said in a statement.

However, South Africa still wanted to make sure that she was “processed through the legal system”, the ministry added.

Discussions were taking place with Mrs Mugabe’s lawyers and the Zimbabwean High Commission over the issue, it said.

This happened in 2015, when it failed to execute an international arrest warrant for Sudan’s President Omar al-Bashir who was wanted by the International Criminal Court.

South Africa’s government argued that he qualified for diplomatic immunity, but the country’s judges disagreed. The government was then strongly criticised for undermining the rule of law.

It seems that the government wants to avoid a similar backlash and is therefore insisting that Mrs Mugabe must appear in court.

But by taking such an approach it risks a diplomatic row with Zimbabwe’s government – a staunch ally whom it has resolutely defended over the years despite international criticism of President Robert Mugabe’s human rights record.

So the two governments are bound to be in talks to resolve the crisis over Mrs Mugabe.

One option being mentioned in the South African media is that Mrs Mugabe should plead guilty during a short court appearance, and pay a fine.

But it is unclear whether Mr and Mrs Mugabe – known for their uncompromising nature – will agree to this, especially after Zimbabwe’s ruling Zanu-PF party said in a tweet on Tuesday that the first lady was “attacked”, contradicting the version of her accuser.

Zimbabwe’s main opposition party, the Movement for Democratic Change (MDC), said the first lady was a “total disgrace and a complete national embarrassment”.

“She has to be brought to order and indeed she has to appreciate that she is not a law unto herself,” it added in a statement.

Confusion surrounded the case, with South Africa’s Police Minister Fikile Mbalula saying at one point on Tuesday that Mrs Mugabe had handed herself over to police and would appear in court.

She did not appear and police later said she had agreed to turn herself in but then failed to do so.

Police opened a case of assault against Mrs Mugabe after the model, Gabriella Engels, accused her of hitting her over the head with an extension cord.

The alleged assault took place after Mrs Mugabe found her with the first lady’s two sons, Robert and Chatunga, in a hotel room in Sandton, a wealthy suburb north of Johannesburg, on Sunday evening.

Mrs Mugabe’s sons, who are both in their 20s, live in South Africa.

The first lady was in South Africa to be treated for an ankle injury when the alleged assault took place, Zimbabwean media reported.

Ms Engels released an image of a head injury online.

“When Grace entered I had no idea who she was,” she told South African broadcaster News24.

“She walked in with an extension cord and just started beating me with it. She flipped and just kept beating me with the plug. Over and over. I had no idea what was going on. I was surprised. I needed to crawl out of the room before I could run away.

“There was blood everywhere,” she added. “Over my arms, in my hair, everywhere.”

She registered a “case of assault with intent to do grievous bodily harm”, police said.

Who is Grace Mugabe?