Grace Mugabe back in Zimbabwe after assault claims 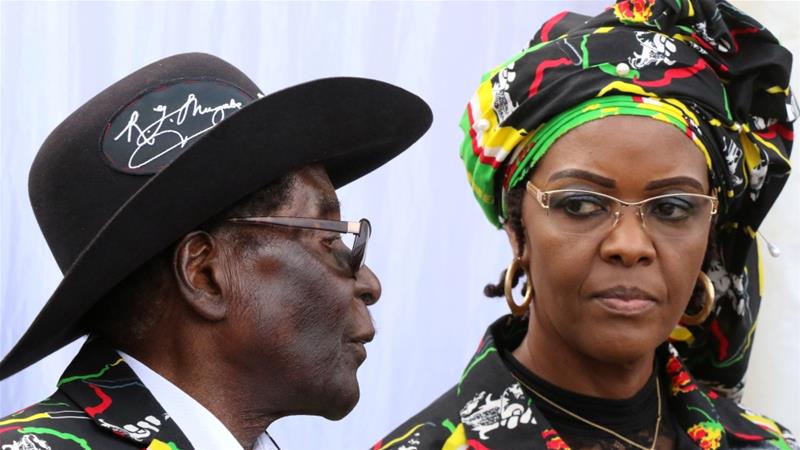 Zimbabwe’s first lady fails to hand herself in to South African police after facing accusations of assaulting a model.

Zimbabwe’s first lady, Grace Mugabe, has returned home from South Africa after failing to turn herself in to police in Johannesburg to face charges of assaulting a model in a hotel room.

There was no immediate public comment on Tuesday on the case from Grace, 52, a possible successor to her husband President Robert Mugabe, 93, who has ruled Zimbabwe since 1980. But Zimbabwe government sources confirmed she had returned home.

“Yes, she is back in the country. We don’t know where this issue of assault charges is coming from,” a senior government official told Reuters news agency on condition of anonymity.

A second official also confirmed to Reuters that Grace had returned, saying “she is around now” and accused the news media of a plot to tarnish the first family’s name.

Earlier, South African police had been negotiating with Grace’s lawyers to get her to turn herself in to face charges of assault, a senior police source said.

Twenty-year-old Gabriella Engels told South African news media that Grace attacked her after the model had gone to see the Mugabes’ sons Robert and Chatunga at a hotel in Johannesburg’s Sandton district on Sunday.

Confusion surrounded the case on Tuesday. Fikile Mbalula, South Africa’s police minister, said early on Tuesday that Grace had already handed herself in to police and would appear in court shortly.

But in the afternoon, the magistrates’ court where Grace had been expected to be formally charged closed for the day without her appearing.

The police source said Grace had originally agreed to hand herself in at 10am local time (08:00 GMT) but failed to do so.

The source said police were investigating a charge of assault with intent to do grievous bodily harm.

Asked if Grace was now considered a fugitive, the source said that was not the case at this stage.

“One cannot be a fugitive for not appearing at a court to which they have not been summoned and when they have not been charged of any crime!” Jonathan Moyo, Grace’s close ally and Zimbabwe’s higher education minister, said on Twitter.

South African news media said Grace had been in the country to have an injured foot examined. It was unclear whether she was travelling on a diplomatic passport.

On whether she could be arrested despite having diplomatic immunity, South Africa’s Mbalula said: “All those implications will be taken into consideration.” He then added: “She will be charged.”

A Zimbabwean intelligence source said Grace had been travelling on an ordinary non-diplomatic passport and was in South Africa on personal business.

The News24 website quoted Engels’ version of events in the hotel room. “When Grace entered, I had no idea who she was. She walked in with an extension cord and just started beating me with it,” the model said.

“She flipped and just kept beating me with the plug. Over and over. I had no idea what was going on. I was surprised … I needed to crawl out of the room before I could run away.”

News24 published a picture of a woman it said was Engels with a large gash in her forehead. “I am a model, with this scar over my face my whole career is ruined,” she said.

It was unclear what triggered the incident.

Mugabe’s two sons were kicked out of the Regent luxury apartment complex in Sandton last month after an incident in the middle of the night, staff at the complex told Reuters.

Imelda Fincham, Regent’s manager, did not elaborate but confirmed the pair had left. “They’re no longer here,” she said.

In 2009, a press photographer in Hong Kong said Grace and her bodyguard had assaulted him. Police there said the incident was reported but that no charges were brought.

President Mugabe spoke at a public event marking Defence Forces Day in Harare on Tuesday but did not mention Grace.

Grace was in the news in late July when she challenged her husband to name his preferred successor.

The issue of who will succeed Mugabe has deeply divided Zimbabwe’s ruling ZANU-PF party.

One faction supports Grace and the other Vice President Emmerson Mnangagwa, who is recovering in a South African hospital after he fell ill and was airlifted from Zimbabwe.

Grace has taken on a larger public role in recent years, speaking regularly at meetings to drum up support for her husband and heading the women’s league of the ruling ZANU-PF party.

In speeches this year the president has often slurred his words, mumbled and paused for lengthy periods.

His reign has been marked by brutal repression of dissent, mass emigration, vote rigging and a sharp economic decline since land reforms in 2000.