Grace Mugabe Can Be Arrested

Terrence Mawawa| MDC leader, Morgan Tsvangirai has given the strongest hint that Grace Mugabe can and must be arrested. 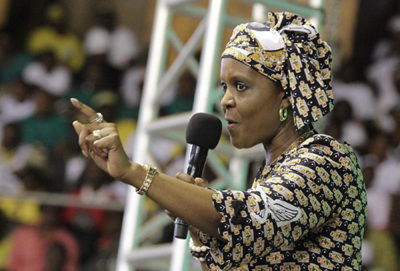 Tsvangirai who said her husband Robert, deserves immunity because of his role in the liberation struggle, also said his wife does not deserve the same treatment.

Tsvangirai who had a long standing political rivalry with Mugabe said there was no need to prosecute the 93- year- old former President.

Speaking in an interview with a South African television channel, Tsvangirai said the people of Zimbabwe should concentrate on viable policies to augment nation building.

“I do not think anyone can ever think of prosecuting Mugabe.

You cannot drag a 93-year- old man to court.

I think the old man deserves to rest. He played a pivotal role in the liberation struggle,” said Tsvangirai.

He however said Grace Mugabe was an overzealous and carefree lady who looted State resources.

“As for Grace Mugabe, I think she has a case to answer and she owes the people of Zimbabwe some explanations.

I do not know whether Grace Mugabe will also be granted immunity but personally I think she must be grilled over her actions,” said Tsvangirai.

The former Prime Minister did not say anything about the formation of a transitional government.