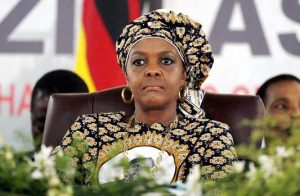 Judge Bashier Vally ruled that the decision to grant Mugabe immunity  is inconsistent with provisions in the Constitution and that  the ministry should pay the costs of the case.
The DA had applied to the court to have the former Zimbabwe first lady’s diplomatic immunity revoked after she was accused of assaulting South African model Gabriella Engels at a luxury hotel in Johannesburg in 2017.  Engels posted pictures of herself with numerous facial injuries on social media.
When the case was heard in the High Court in Pretoria in May this year, Advocate Hilton Epstein SC argued that the South African government did not grant diplomatic immunity to Zimbabwe’s former first lady, but only recognised it after the assault charge.
Epstein contended that then International Relations and Cooperation Minister Maite Nkoana-Mashabane did the right thing by “recognising” Mrs Mugabe’s diplomatic immunity.
Earlier this year, Engels, who had been receiving legal assistance from AfriForum, said she hoped Zimbabwe’s former first lady would be brought back to South Africa to face the charges.
“I hope she does come back to account. I leave everything now in God’s hands and I know that he will get us through everything.”