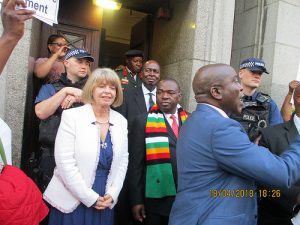 Zimbabwe’s military regime was embraced in the UK while back home Vice-President General Chiwenga sacked all nurses in government hospitals for demanding a living wage. See: https://zwnews.com/vp-chiwenga-pointing-at-ed-mnagagwa-independence-day/.

Vigil activists were outside the Embassy in London on Independence Day when the Foreign Affairs and International Trade Minister General Sibusiso Moyo was present at a reception. The Embassy called the police who were happy to let our protest continue as long as we didn’t block the Embassy doorway.

The Vigil distributed the following leaflet:

‘Lipstick on a pig’

Exiled Zimbabweans welcomed the ousting of Robert Mugabe in the military coup last November. But the Zimbabwe Vigil cautions against prematurely embracing the new regime represented here by Lieutenant General Moyo, the new Minister of Foreign Affairs and International Trade.

General Moyo is fresh from what the regime’s newspaper calls ‘a charm offensive’ in New York, where he parroted President Mnangagwa’s mantra that Zimbabwe is ‘open for business’. General Moyo said that, apart from economic reforms, the regime is undertaking ‘serious agreed political reforms’.

The Vigil has seen no sign of these and suggests that you would be wise to see whether the forthcoming elections are accepted as free, fair and credible.

Here’s what the Zimbabwean academic Dr Nkululeko Sibanda, Professor of International Relations at the University of Huddersfield, has to say: ‘No country develops out of putting a begging bowl for the rest of the world to donate to. He must develop the conditions of the economy on the ground, the fundamentals of the economy. In terms of the elections, I think it’s a serious challenge and it would seem as though the government is trying to put lipstick on a pig and hoping that it will look like something beautiful to marry. It is not.

‘If they are serious about free and fair elections, they must forthwith make available a voters’ roll that can be inspected by any member of the public, at any particular moment, either for a fee or no fee at all. Failure of that, the election is just going to be a joke and will only be believed by those who are desperate to believe the ED (Mnangagwa) government.’

In our 16th year of protesting outside the Embassy it was interesting to see several of our former supporters joining the queue for the Embassy reception.

Vigil supporters were on the street again today, Thursday, to support Action for Southern Africa’s protest against oppression in Swaziland outside the Commonwealth Heads of Government Meeting in Pall Mall.

Pall Mall was alive with activity – 4 other protests were going on at the same time:  for Biafra, Barbuda and Sri Lanka as well as an LGBT group demanding that anti-LGBT laws should be abolished in the Commonwealth.