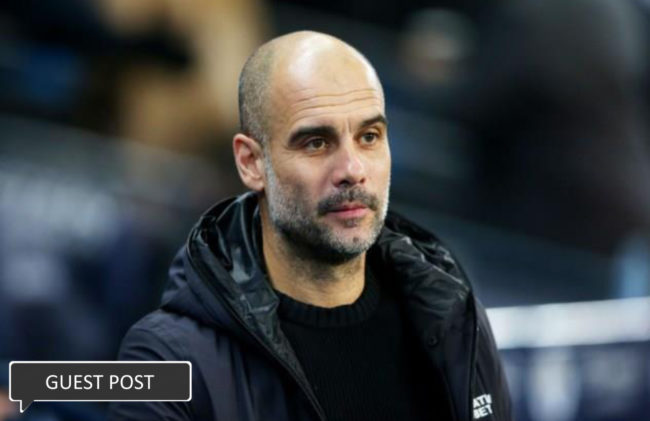 Barcelona manager Pep Guardiola in his three years at the Etihad Stadium became the fastest head coach to reach 100 Premier League wins following their 2-0 victory against newly-promoted club Sheffield United, highlighted as bet of the day during that round.

After struggling to find the back of the net in the first half of the game on Sunday, Sergio Aguero and Kevin De Bruyne were able to score to seal the victory for the defending champions at the Etihad Stadium, to help the Spanish manager reach his 100 wins from 134 English Top Flight matches.

The match opener – Aguero’s goal – was also the 1000th goal for Guardiola in his managerial career, having formerly coached Barcelona and Bayern Munich.

The 48-year-old manager was able to beat rival Jose Mourinho in setting a new record which was a 100 win in 142 games as a Premier League manager, back when he helped Chelsea to a 3-1 victory against Manchester United in January 2014.

Second on the former list is Liverpool’s head coach Jurgen Klopp, having achieved 100 League victories in his 159th games which didn’t happen till December 2019 after defeating Everton in a 5-2 win at Anfield.

Guardiola being as humble as ever didn’t let his achievement be highlighted with only his efforts as he also brings out how his players have played a role in this and the backroom team.

Speaking about his achievement, the Spanish manager said: “It’s a big compliment for the club, players and staff to achieve 100 victories.

“It’s an incredible achievement for this incredible organisation and big compliments to all the players and staff we had during this period.

“Of course we are proud of everything in these seasons, the incredible effort. When you think about 100 wins in 134 games it is an incredible achievement. It is nice to be alongside these big teams.

“It means a lot. Sometimes we lose perspective. But when you have this perspective with how many games you see it. We fight for 100 wins. I am happy especially for the players. They are the reason we won 100 games.”

Having reached that achievement it is only little surprise to see that he lifted several trophies along the way while managing the English club. Adding the manager to your betslip is highly recommended as is done often on https://footballpredictions.com/betslip/.

The Spanish manager was then announced as the new manager of Bayern Munich during the winter transfer window in 2013 replacing the club legend Jupp Heynckes.

Guardiola was announced manager for Manchester City in 2016 and he is currently on his fourth season with the English club. He helped them lift their League title in 2018 with 100 points gained that season. He won their second title the following season this time with only 98 points after winning 14 straight games to deny Liverpool by a point on the last day of the season.

This season, however, might just see Guardiola lose out on winning the Premier League title for three consecutive seasons as Liverpool are currently top of the table with several points.