Nduduzo Tshuma Bulawayo Bureau
PRESIDENT Mnangagwa met chiefs from the Matabeleland region and the Midlands Province at State House here yesterday to discuss a number of issues, including traditional leaders taking a leading role in bringing closure to the Gukurahundi chapter.

The engagement, carried out in a spirit of openness and commitment to unite the country by both the Government and chiefs, also discussed the effects of drought, development and inclusivity. The meeting was part of President Mnangagwa’s broad-based engagement with Zimbabwe’s key actors in politics, civil society, business, media and other stakeholders.

Briefing journalists after the closed meeting, the President said he attended the indaba at the invitation of traditional leaders who wanted to share various challenges faced by their respective areas. 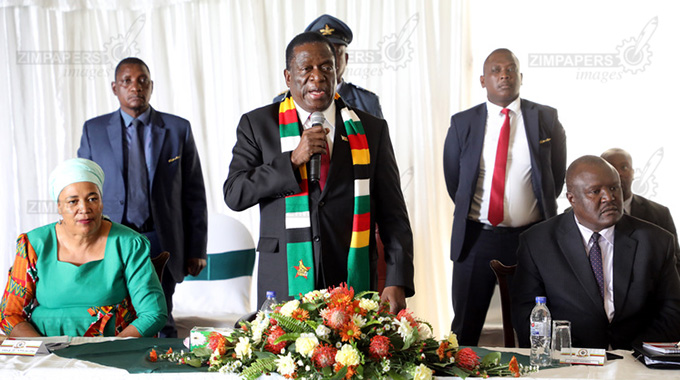 He said chiefs argued that it was important for them to play a role as it was their subjects who were affected by Gukurahundi.

“The two provinces have put forward similar methods of dealing with the issue of Gukurahundi,” said President Mnangagwa.

“The major point that has come out is the fact that Gukurahundi affected communities in which they preside as traditional leaders. They are directly affected by the incident of Gukurahundi.

“Therefore, they have made an argument that in its resolution, we should as Government create a platform where the chiefs should participate substantively because it is the communities which they preside over which were affected.”

President Mnangagwa said any other interest groups on the matter should have single platforms where the issues can be discussed and resolutions or way forward agreed.

He said the traditional leaders raised the need for equal opportunities in the recruitment of staff into Government and young people in the security sector.

“There are areas that have been pointed out which are not satisfactory, which I have assured our traditional leaders that the areas that are weak should be corrected so that there is fairness in recruiting people into the security sector,” said President Mnangagwa.

He said the chiefs shared the effects of drought in their areas which negatively impacted on food security.

The traditional leaders, the President said, raised social issues which needed urgent attention such as education, roads infrastructure and the availability or access to clean water.

“These challenges are not only found in these two provinces, they are also prevalent in other provinces, but we have done our best to look at how these issues will be addressed,” said President Mnangagwa. 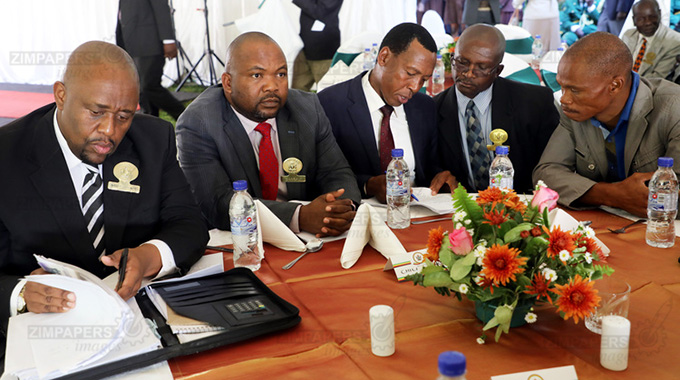 (From left) Chiefs Ngungumbane, Siansali-Binga,Nyangazonke-Kezi, and Mzimuni Masuku-Gwanda follow proceedings during a chiefs meeting with the President at State House in Bulawayo yesterday. — (Picture by Eliah Saushoma)

“I think we had an open discussion and last but not least, we all pledge ourselves, Government and communities to unity”. President Mnangagwa castigated efforts by some elements to divide chiefs along tribal lines.

Speaking briefly before the closed door session with chiefs, President Mnangagwa also declined requests by some traditional leaders to have deliberations in the absence of Chiefs Council president Chief Fortune Charumbira.

“Secondly, I received a letter from some two chiefs requesting me to meet them here in Bulawayo, chiefs from Matabeleland North and Matabeleland South, I’m now informed that chiefs from my province, Midlands have been picked, selected on the basis of tribe. I don’t like that.

“We in the Midlands are united, we will not accept to be divided, so the chiefs from Midlands will remain in this indaba, but they will not speak because of the basis in which they have been brought here.”

In his welcome remarks, Chief Charumbira said they were honoured to sit with the President and discuss critical issues affecting communities.

He said traditional leaders played an important role in the development and unity of communities.

“What’s more important is the issue of unity in the country,” said Chief Charumbira. “As a country, we can’t afford disunity, other countries have paid highly and when you see the experiences of other countries you see that it is important that we should work towards unity everywhere you are.”

Giving a vote of thanks, chief’s council deputy president Chief Mtshane Khumalo said the attempt to exclude Chief Charumbira was not the stance of the generality of chiefs from Matabeleland, but just one or two individuals.

He said it would have been unfair had the meeting been allowed to exclude Chief Charumbira as leader of traditional leaders in the country.

Since the coming in of the Second Republic, President Mnangagwa has engaged a number of key sectors in line with his thrust for collective dialogue towards the development of the country.