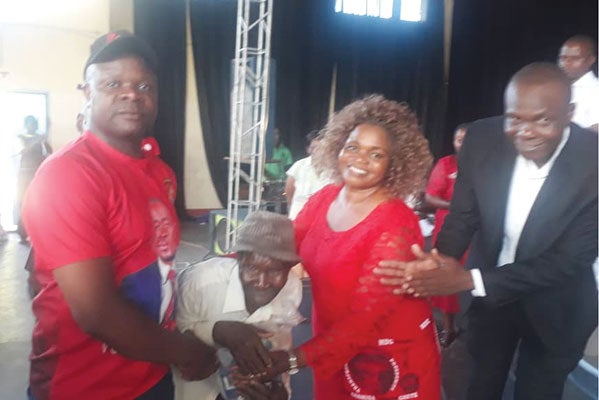 MKOBA legislator and MDC party national organising secretary, Amos Chibaya, on Sunday dished out food hampers to the elderly and threw an end of year party for the constituency.
At least 100 senior citizens received hampers comprising basic commodities such as rice, cooking oil, sugar and soap.

People from lower age groups drawn from all the wards in Mkoba also thronged Mkoba 1 Secondary School, where they were treated to freebies at the end of year party, where a beast was slaughtered.

In a short address to the gathering, Chibaya said the year had been tough for everyone due to the worsening economic crisis, but he emphasised that there is need for people to sacrifice and bring smiles on faces of the most hard-hit citizens.

“It is not like I am someone who has a lot of money. We are all struggling to make ends meet. However, I had to sacrifice and ensure that at least our elders have something to put on the table on Christmas day. It was important that we also gather as a constituency to make merry so that we remain hopeful of better days,” he said.

Chikwinya told the gathering that as MPs, there was need to be constantly touching base with the grassroots supporters.

“We have had cases of MPs who just disappear from the constituency once they are elected. Today, it has been a reminder that an MP must find special time for his people. I am happy MP Chibaya has led by example. Things are hard due to economic challenges, but we must be optimistic of change. As the MDC, it is that change which delivers that we are fighting for,” he said.

Gogo Hardlife (71), from Mkoba 12, told Southern Eye that all her children had relocated to South Africa in search of greener pastures, and she had not heard from them in the past five years, which made the handouts significant for her.

“It has not been easy for me and my six grandchildren. Sometimes we survive on one meal a day. The food hampers will be very useful to us,” she said, almost breaking down into tears.