It’s a Saturday morning and children of school going age are busy playing soccer with a plastic ball on the once green lawn outside Mtapa hall.

The hall is located in Mtapa suburb, Gweru’s oldest suburb with a population of more than 12 500 people.

It is at this iconic hall where Zanu held its first congress in 1964. The People’s Congress resolved to wage an armed struggle against the settler regime which had not only deprived the majority blacks of their rights but had taken over their land and confined them to barren and unproductive land.

The congress was held from May 21 to 24 in the then city of Gwelo, later renamed Gweru. It is at this congress where the late Ndabaningi Sithole was elected president and the late former president Cde Robert Mugabe was elected secretary general. President Mnangagwa was among the many who attended the congress.

On May 21, Chronicle reported about the congress and when Cde Mugabe was asked by a reporter if any European was going to attend, he was quoted as saying: “No, ours is the blackest nationalist party.”

Zanu was banned later that year by Ian Smith’s government.

It is after that congress that President Mnangagwa and his colleagues popularly known as the Crocodile Gang embarked on a number of sabotage missions including the bombing of a goods train in Masvingo in a bold act of defiance against the oppressive Rhodesian regime.

The 1964 congress was Zanu’s first after its formation in August 1963 and the party was confronted with the unenviable task of waging an armed struggle.

Boycotts and strikes by blacks in the then Rhodesia had failed to bring about the desired change. The strikes were brutally suppressed leading to deaths and the arrest of blacks.

On Tuesday this week when President Mnangagwa celebrated his 79th birthday, former Midlands State University historian Professor Ngwabi Bhebhe described him as one of the freedom fighters who after the first Zanu congress of 1964 held at Mtapa Hall in Mtapa suburb in Gweru initiated the rise against colonialism.

Prof Bhebhe who served as the Vice Chancellor for MSU from 1999 to 2016, said Mtapa Hall is one of the places that must be recognised and turned into a national monument as it has a rich history about the liberation struggle, which includes the Zanu congress.

“Following Zanu’s first congress at Mtapa Hall in Gweru, President Mnangagwa who was nick-named Ngwena due to his crocodile style in sabotage activities, was part of the Crocodile Gang, an elite group of guerrilla fighters during Zimbabwe’s armed struggle, carried out massive sabotage activities against the colonial government,” he said.

When President Mnangagwa passed through Mtapa Hall last year, he said he had nostalgia for the hall because of its rich history.

“The thoughts of the events which transpired on May 24, 1964 feels like it’s just yesterday but it has been many years. On 24 May 1964, we had just arrived from China from training and we were able to be slipped in to attend the first congress of Zanu at that hall,” recalled President Mnangagwa shortly after he had toured the city to gauge residents’ adherence to the national lockdown to contain Covid-19.

“I remember that this is where Ndabaningi Sithole was elected president, Leopold Takawira vice president, Herbert Chitepo national chairperson, Mugabe secretary general and Maurice Nyagumbo national organising secretary, deputised by (the late Vice President Simon) Muzenda. Enos Nkala was elected treasurer, Simpson Mtambanengwe secretary for international relations, I think deputised by Trynos Makombe and so on and so on.”

“Yes, I am feeling a lot of nostalgia, but now it’s history that I have to go back to again. It’s been many years, over 50 years ago we were here in Gweru and I can still remember events as they unfolded.

“Today we are an independent country. At that time it was Rhodesia and we were busy planning how to remove Ian Smith’s government and those were the initial stages of our armed struggle when we were recruiting young people for military training,” he said. 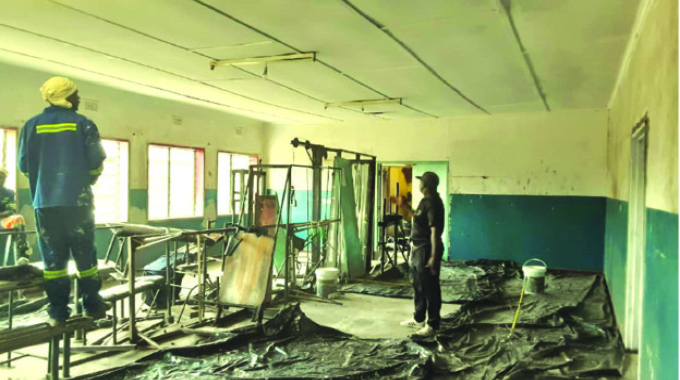 So, it was at the 1964 congress where Zanu set the tone for the future, which meant the dismantling of colonialism and everything it entailed.

The defeat of Ian Smith on the war front and the electoral victory that introduced democracy in 1980 set Zanu PF on the path to reclaim the people’s birthright, the land and other natural resources.

It is 57 years on but the hall virtually looks the same as it was back in 1964, just a rectangular building where black children used to watch bioscopes at weekends.

The hall is being refurbished by Gweru City Council with support from CARE Zimbabwe under its humanitarian assistance initiative at a cost of US$10 000.

“This an important hall in Gweru hence the decision to renovate it. The first ruling party congress was held here. Liberation struggle meetings were also held at this hall,” he said

Cllr Giwa said artistes such as Thomas Mapfumo, Mahotella Queens, Pat Shange from South Africa, Safirio Madzikatire and others, used to entertain people at this place.

“It was a venue for movies, dancing competitions, modelling and also boxing with the likes of the late Langton “schoolboy” Tinago and Proud “Kilimanjaro” Chinembiri trading leather. Mtapa Hall was the face of the community, and therefore influenced residents’ livelihoods,” he said.

A resident, Mrs Rosemary Mwale said after the renovations, authorities should mount pictures depicting the past.

“I think I was 15 years old when we heard of the Zanu congress. I was young and have lost memory of events then. There should be pictures displayed, an art gallery of the gallant freedom fighters who met that day because it is their bravery that led to the country’s independence,” she said.

Zanu-PF Midlands provincial chairperson Engineer Daniel McKenzie Ncube said there is a need to preserve the history of the iconic hall.

“The year 1964 was a defining moment in the struggle for independence. The first structured leadership of Zanu strategically decided to hold their first congress at Mtapa Hall. This is very significant and the hall will forever remain the symbolic edifice of the struggle,” he said.

Acting regional director of the National Museums and Monuments of Zimbabwe’s Central Region Mr Clapperton Gutu said they were working on making the hall a national monument.