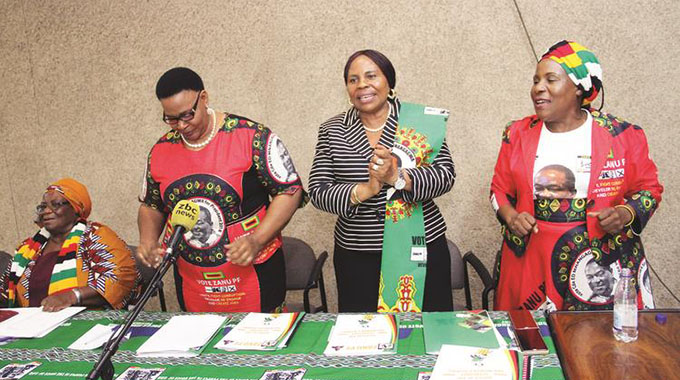 Victor Maphosa Herald Correspondent
The ZANU-PF Women’s League has warned former president Robert Mugabe against criticising and trying to soil the image of President Mnangagwa and his new administration.

The warning comes on the back of reports carried by the private media, insinuating that Mr Mugabe had castigated President Mnangagwa for deploying security forces to restore order during the recent MDC-orchestrated violence last month.

In a statement yesterday, Zanu-PF secretary for Women’s League Cde Mabel Chinomona reminded Mr Mugabe that President Mnangagwa was in office because the majority of Zimbabweans voted for him.

“Zanu-PF Women’s League wishes to express its discomfort and displeasure at the negative print and electronic media reports attributable to the former President Cde Robert Mugabe, criticising the sitting President of Zimbabwe Cde Emmerson Dambudzo Mnangagwa and his administration,” she said.

“We note with concern that the alleged media reports by the former President are calculated to bring instability in the country and put the reputation of the President in disrepute. We need to remind the former President that His Excellency Cde E.D. Mnangagwa is an astute leader, mature unifier who pledges servant leadership and above that, he was constitutionally and unanimously voted as President of this Republic by the majority of Zimbabweans in their diversity,” she said.

Cde Chinomona urged Mr Mugabe to accord President Mnangagwa the same respect that he accorded him during the 37 years he was in power.

“He may be reminded too that even during his presidency, not everything was perfect, but we continued to support him as the Women’s League. We are alive to the machinations of our detractors and enemies, and that gives us strength to continuously support Cde Mnangagwa.”

Cde Chinomona said the Women’s League is convinced that President Mnangagwa will bring development to Zimbabwe.

“We are now in the Second Republic, and a new dispensation, as ZANU-PF Women’s League, we are totally convinced that President Mnangagwa is our messenger of hope, who is poised to bring accelerated development because he is a pragmatic and visionary leader.

“We call upon all women, youth(s) and the nation at large to continue supporting our dear President, whose efforts to rebuild this nation are quite evident. We also note with satisfaction the tireless efforts by President Mnangagwa and his administration to revive the economy, create harmony, promote democracy, peace and uplift the status of women,” she said.

She said the league is humbled by the support given to President Mnangagwa by the President of Botswana, President Mokgweetsi Masisi.