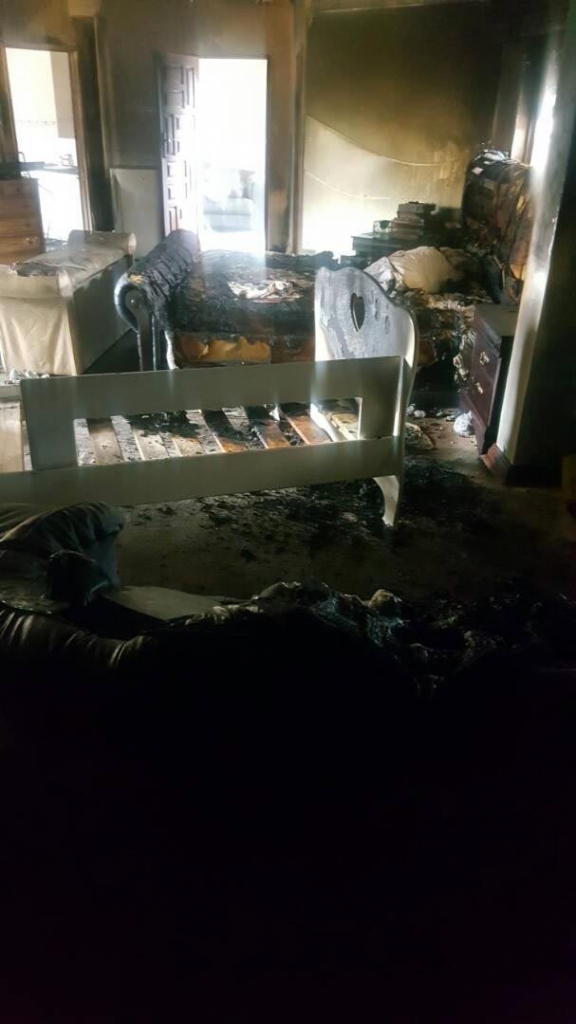 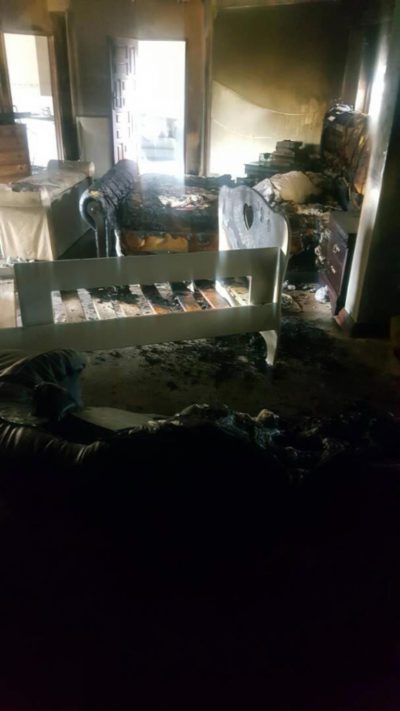 The shootout only stopped after a reinforcement team, led by the military intervened, leading to the arrest of a suspected rogue police officer believed to have started the fight.

The reinforcement team arrived at the scene aboard two helicopters from the Air Force of Zimbabwe, fire brigade trucks and military tanks, where they also had to douse the flames that gutted part of Chihuri’s lavish villa.

An Air Force helicopter hovered over the skies to put the situation under control after heavy shelling.

The gunfire exchanges, according to sources from the neighbourhood, took place from around 10am to around 1:30pm.

“I can confirm that there was an incident at his (Chihuri’s) residence involving one of his aides who was guarding the house,” Mpofu said.

“One of the aides was attempting to break into the house to steal, but was restrained by one of his colleagues and there was a misunderstanding. The one who was trying to steal set the house on fire and that is when all hell broke loose. He started shooting randomly, but fortunately no one was injured.”

Mpofu said the police officer also attempted to commit suicide but was restrained. He said the army was called in to help in putting out the fire.

Police could not immediately shed light on the skirmishes with Officer Commanding Harare province Senior Assistant Commissioner Elias Mvere saying he would only provide details later.

The drama occurred as Chihuri was away attending a military graduation ceremony at the Zimbabwe Staff College where President Emmerson Mnangagwa was the guest of honour.

The police boss left the ceremony midway after being informed of the incident.

Chihuri’s neighbours said the incident started when an armed police officer turned rogue and tried to steal some wares including a television set and clothes from his boss’ mansion.

The armed officer, believed to be closely related to another top cop, was allegedly confronted by a groundsman, but turned rowdy.

The groundsman immediately alerted another police officer who had come for regular patrols.

“The officer was armed. What normally happens is that those who report for duty during the night leave their guns with the one on day shift,” said a neighbour, who declined to be named for security reasons.

“He had a gun and the gardener could do nothing to stop him. Things went bad when another police officer on patrol came and advised him to stop what he was doing.

“They had an argument until the other police officer decided to call the police headquarters as well as the officer’s father to advise him of what he was doing. On realising that he had been reported, he went berserk and confronted his colleague, challenging him on why he had reported him.”

According to the source, the two quarrelled and the rogue officer opened fire, forcing his colleague to flee to the back of the house while a flurry of bullets perforated the precast wall.

The groundsman also jumped over the precast wall at the house and sought refuge at a neighbouring house believed to belong to a Cabinet minister.

The rogue officer allegedly tried to escape using Chihuri’s Toyota Landcruiser vehicle that was parked in the yard, but found the gate cordoned off by the reaction team. He allegedly jumped off the vehicle and retreated into the house from where he randomly opened a volley of gunfire, destroying a lot of property including part of the roof.

“He set the house on fire damaging a significant part of one of the wings and its roof,” said another witness.

The officer, believed to be attached to the Zimbabwe Republic Police’s Support Unit, was apprehended after he ran out of ammunition.

The Air Force of Zimbabwe Fire Brigade put out the fire and police forensics and ballistics teams immediately attended the scene to conduct investigations.

When NewsDay arrived, several police officers were combing the premises with journalists barred from entering the house.

Chihuri has lately been under fire from the public and political leaders, who are calling on him to step down for failing to instil discipline within the police force.

On November 24, Chihuri was booed by members of the public while pledging his allegiance to Mnangagwa, who had just been sworn in as President. The police boss had a torrid time maintaining composure as he struggled to read through his loyalty pledge.

Chihuri was firstly booed as he arrived at the National Sports Stadium and when he stood up to pledge loyalty to the new Head of State.

He stands accused of sanctioning use of brute force to crush dissenting voices on behalf of former President Robert Mugabe.