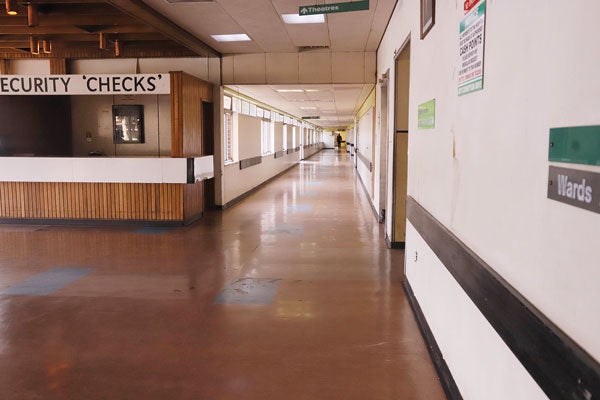 THE situation at the country’s major public hospitals has deteriorated to alarming levels, with patients reportedly dying on stretcher beds before being attended to, while most wards are virtually empty as nurses and doctors continue with their industrial action.

Yesterday, a gloomy cloud hovered over Parirenyatwa Group of Hospitals after more than 50% of the nursing population stayed away, with patients being turned away in droves.

This came as the Labour Court ruled against the industrial action, but the doctors dismissed the ruling as a nullity, saying they remained financially incapacitated.

Justices Lawrence Murasi and Rodgers Manyangadze, who presided over the matter, ordered the striking medical staff to report for duty within 48 hours and censured government against taking disciplinary action against them.

“Members of the respondents who participated in the said collective job action be and hereby ordered to report for duty within 48 hours from the date of this order and the applicant shall be entitled to take disciplinary action against members of respondents who fail or neglect to comply with the order,” the judges ruled.

“Applicant (government) shall not take any disciplinary action against members of the respondent who participated in the collective job action from September 2019 up to the date of the order.”

The judges referred the case to an arbitrator, who should deal with the issue within 14 days.

At their last meeting on Thursday, the health professionals said they could no longer sustain themselves and needed their employer to relook their grievances, which include salaries commensurate with the bank rate.

“Our contracts have salaries pegged in US dollars, so the employer must consider aligning our salaries with the current interbank rate.

“Look at us, look at my plastic shoes, my unkempt hair. Do I look like a nurse?” a nurse who declined to be named asked rhetorically.

Parirenyatwa, which is one of the biggest referral hospitals in the country, was empty yesterday, with only a few student nurses checking in on a handful of patients still admitted.

Many patients were discharged when the doctors’ crisis intensified.

The facility, which is usually a hive of activity, was eerily quiet with both the outpatients and casualty departments deserted.

Contacted for comment after the Labour Court ruling, Zimbabwe Hospital Doctors Association acting secretary-general Tawanda Zvakada said: “The ruling does not capacitate us in any way.
Members will still not go to work because they are not able to. We value our patients, but this is beyond our control. We also have families that rely on us for survival.”

But he said they were willing to go back if their concerns were addressed.

The senior doctors, who have also claimed incapacitation, said the court ruling was inconsequential as the cost of living remained higher than their wages.

“Prices are still high, but if they want us to report for duty, they should send transport to pick us up because we are still incapacitated as before,” a senior doctor said on condition of anonimity.

There were reports that some patients were dying on stretcher beds before being attended to because of the industrial action.

On Thursday, NewsDay Weekender witnessed a man, Learnmore Ndemere, with a heart condition being turned away. His relatives looked crest-fallen as they congregated to map the way forward.

“His body is now swelling up, look at his feet, face, hands even. Honestly, how can we take someone so sick back home?” one of the relatives asked with tears rolling down their cheeks.

Ndemere’s father pleaded with the government to find a lasting solution to the doctors and nurses’ strike.

Health ministry spokesperson Donald Mujiri referred questions to the Health Services Board, whose chairperson, Paulinus Sikhosana, said he was travelling and could not comment on the matter.