How the ‘Magnificent 40’ prevented 26,000 crocodiles from escaping through cyclone and floods – Mozambique

Source: How the ‘Magnificent 40’ prevented 26,000 crocodiles from escaping through cyclone and floods – Mozambique | Club of Mozambique 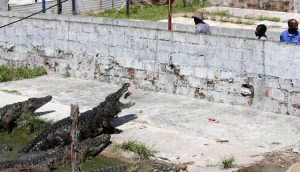 Portuguese entrepreneur Manuel Guimarães was running a farm housing 26,000 crocodiles in central Mozambique when Cyclone Idai flattened the farm’s fences. Only the efforts of 40 “magnificent men” prevented the animals escaping and a “terrible disgrace”from happening.

More than a week after the cyclone which caused hundreds of deaths and displaced thousands of people, few know about the 40 men who spent the night of the cyclone raising the walls as they fell over and over again, preventing the crocodiles from breaking loose in the Beira area. But Manuel Guimarães knows, and his gratitude knows no bounds.

Now that the rain has stopped and the farm is no longer surrounded by water, Guimarães returned on Monday to his farm in Nhaugau, Beira district, emotional at the sight of 10 years of work laid low by the winds. There he finds Anísio Chinguvo and the other ‘Magnificent 40’, cutting felled trees, cleaning the land, and restoring what may be restored.

Anísio, a native of Maputo who has worked for Manuel Guimarães for a dozen years, remembers how, on March 14, his boss called to tell him that they had to prepare for very strong winds. Anísio says he thought it was just a joke, because they had seen strong winds in 1977 and 2000. But, said Manuel Guimarães, “Anísio, it’s no joke, you’ll see something you’ve never seen before.”

The 40 workers placed zinc sheets next to the bricks-and-mortar walls, especially the crocodile pens, and waited for the storm. No-one left, no-one went home to their families.

And at 10:00 p.m. on the night of Thursday, March 14, when Idai arrived, the storm found the 40 there, sitting or lying down because of the force of the wind. “It was not easy – talking about it still hurts. Every thought was, I’ll lose my family, my children, to save a crocodile. It hurt, because losing two nights isn’t easy.” 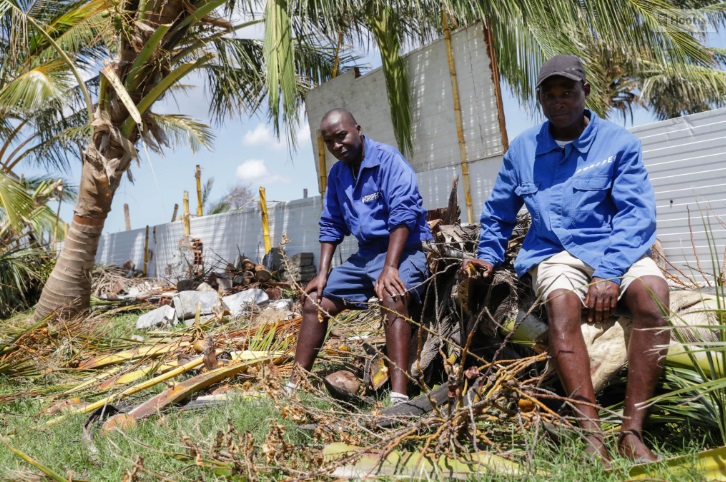 Two nights without sleep, but especially difficult was the night of the cyclone, as Anísio tells Lusa, standing beside the wall confining the biggest crocodiles, which the wind managed to bring down and is now replaced by zinc sheets.

Because it was not enough to be there. It was also necessary to go see to the other tanks, to check if the falling trees hadn’t broken down other walls. But that wall, the one containing the big crocodiles – “We couldn’t go far from that wall. We knew that, if the wall collapsed, it would be a total disaster: it would be no easy task to control these animals outside.”

And the truth is that, that night, when the wall gave way, they were there, ready to push into place the zinc sheets they had taken, cutting bamboos to hold them. And at 05:00 a.m. on Friday, when the wind finally died down, the crocodiles were still in their tanks.

“We were earning our wages for years to come – not only this March, but for the next few years. Imagine if all the crocodiles had gone, I wouldn’t be here, I’d be at home – because there wouldn’t be a job,” the leader of the 40 heroes says.

It’s been more than a week, but Manuel, aged 63, is still thrilled when he speaks of his “magnificent 40”.

If the crocodiles had left, if they had crossed the perimeter of the farm and the 10 kilometres of ditches surrounding it, it would have been “a serious matter”; “a situation of total panic”.

“We would all be catching crocodiles, us, the whole city, the international community. Because 26,000 crocodiles on the loose is unthinkable, especially the big ones.”

The businessman is moved to tears when he speaks of his “40 brave men” lying and sitting by the walls, watching the cyclone and preparing to replace them with zinc sheets as they fell.

“It is thanks to these 40 men that disgrace hasn’t befallen the company because of 26,000 crocodiles worth many thousands of dollars out there on the loose. It would be terrible. Fortunately, thanks to them we are here, we can speak about what happened,” he tells Lusa.

And he adds: “When there was a lot of wind, they would sit or lie down, and when the walls fell they would put up the sheets. It’s a story that needs to be told to show that, in times of need, Mozambicans are there. They left their homes, their children, their families, they lost everything, to be here to defend the farm, and that has is unmeasurable.” 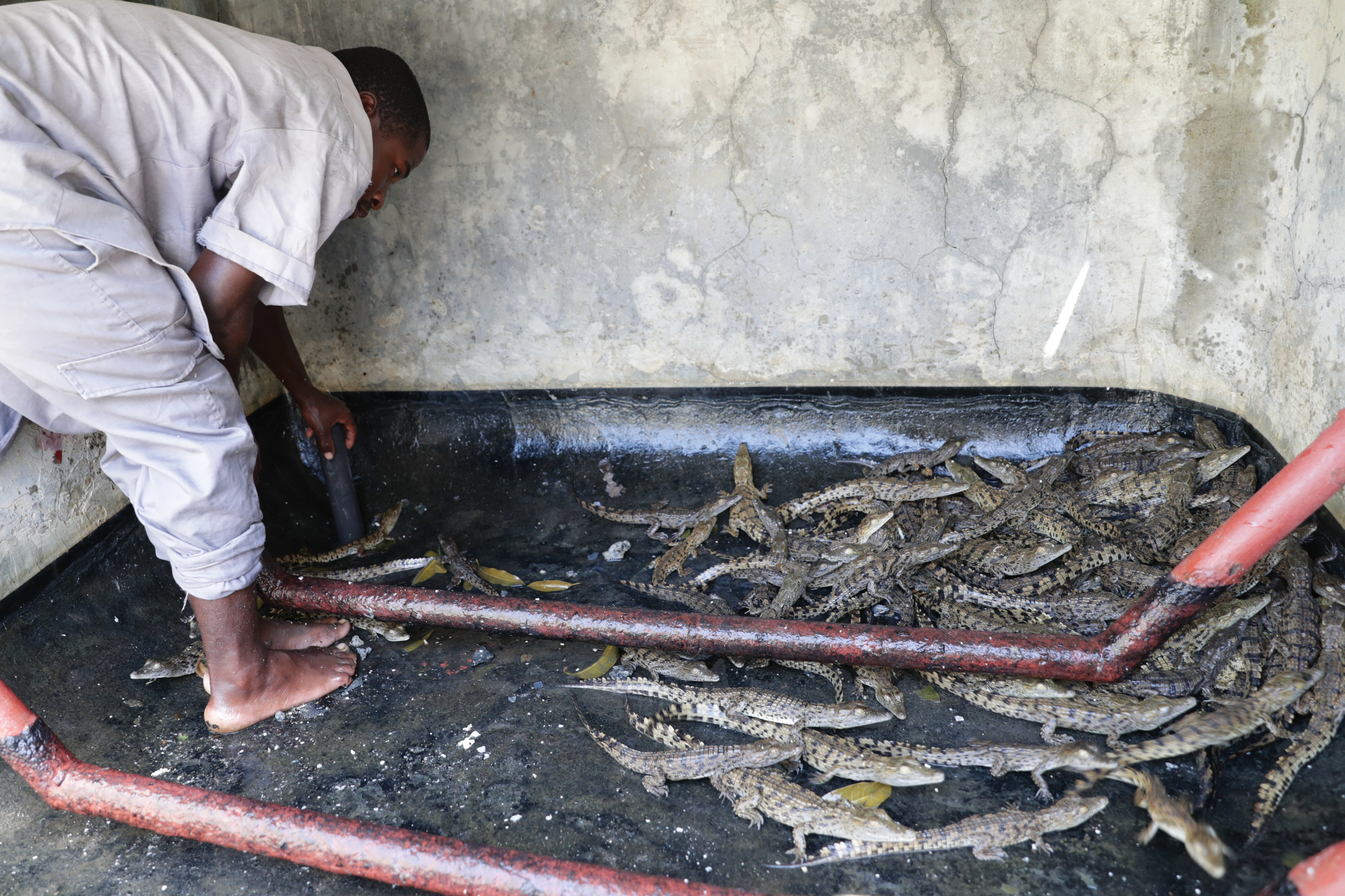 But Manuel Guimarães still has one more hero to relate, one that makes him cry even more. His name is João, and he was busy taking a herd of cows to high ground to escape the flooding, and wasn’t there when his four children, the youngest aged two and the oldest 11, were carried away.

“When I asked him, ‘How are the animals?’ he said: ‘I did not lose the animals, but because of being there, I lost my four children.’

João stayed at work driving the 2,000 head of cattle animals to high ground; even the customary place was not high enough this time. And the water came quickly. At the Nhamatanda farm, he quotes the workers as saying: “In the morning it was on my shoe, an hour later, on my knees, half-an-hour later up to my waist, and an hour after that, we were running for the trees.” “I’ve never seen anything like it. I’ve been here for 25 years, and the water has never reached these levels.”

Manuel Guimarães came to Mozambique for three months to export shrimp, and ended up staying 25 years. Today he is one of the largest cattle breeders in Mozambique and exports shrimp to Portugal, his companies distinguished as the second largest small-to-medium enterprises in the import and export of sea products.

The crocodile project was designed to minimise the loss of human life and in consultation with the government. Eggs were collected to develop the farm, and the skins and ready-made products are sold to Portugal, Italy, South Korea and Japan. The shoes are made in Portugal and the bags in Italy.

The crocodile farm was growing, and had a restaurant and an ecotourism project with two wooden bungalows. “It was a beautiful farm,” Manuel says, growing slowly but “with pleasure”, 10 years’ work, “and then, one day, it all disappeared”.

And not only that. Manuel Guimarães lost all his animals in Buzi, and in Nhamatanda, 500 or so, he estimates. The crocodile farm to show evidence of its misfortunes, the fallen trees and destroyed houses, the overturned warehouses. Gone are the restaurant, the pool, the paint ball area, the ecotourism project – all built with “so much gusto”.

But that is the least of it. Because who can forget worker John, who has been looking for the bodies of his children, up until Sunday still unsuccessfully.

When “Senhor Joao” is ready to rebuild his house, Guimarães will give him a piece of land. Although, so saying, he is moved to tears again. “But I can never give him back his children,” he adds.

Manuel Guimarães cannot find the words to thank João and the rest of the “magnificent 40” at the crocodile farm. And, with their help, he does not doubt that even “a 280-kilometre-per-hour cyclone” will not stop them. 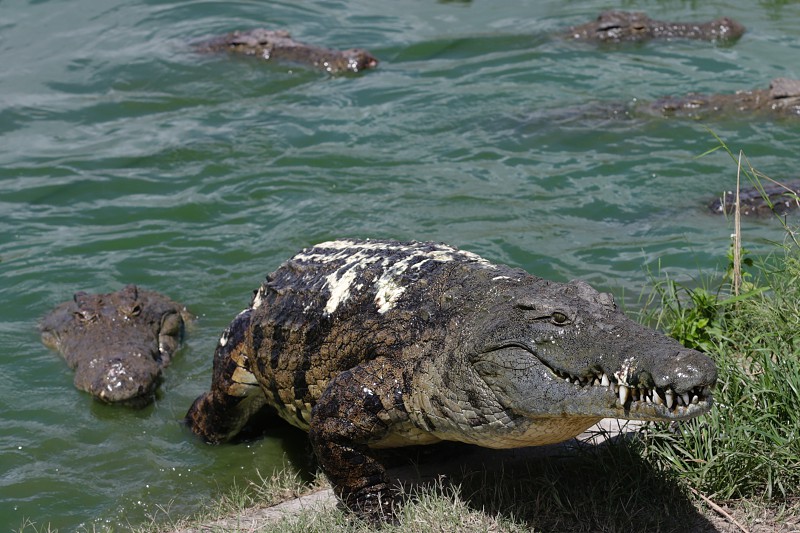 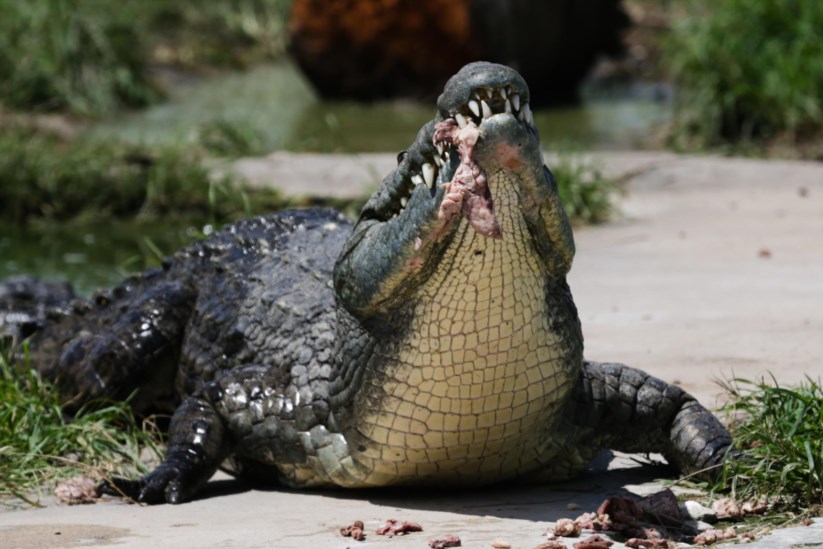