How was Mnangagwa as a father? 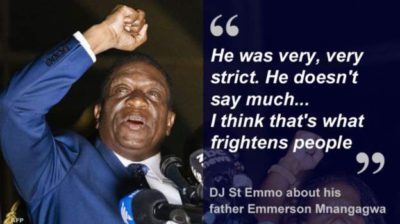 One veteran of the liberation struggle, who worked with him for many years, once put it simply: “He’s a very cruel man, very cruel.”

But his children see him as a principled, if unemotional, man.

His daughter, Farai Mlotshwa – a property developer and the eldest of his nine children by two wives – told BBC Radio 4 that he was a “softie”.

His youngest son, a DJ in Harare, blames his father’s reticence for his fearsome reputation.

“He was a good father, very very strict. He doesn’t say much and I think that’s what frightens people – like: ‘What is he thinking?'”