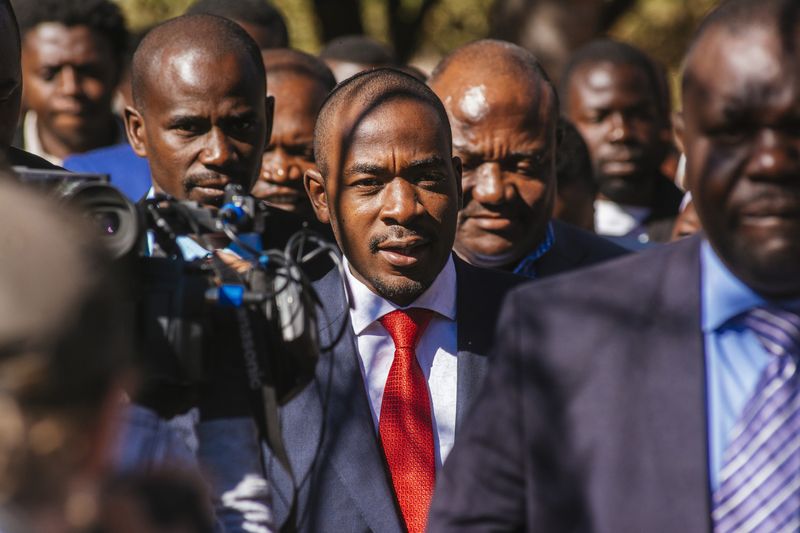 Zimbabwe’s July 30 elections were meant to be a new beginning for a nation driven to its knees during two decades of misrule by the autocratic Robert Mugabe. President Emmerson Mnangagwa, who took office in November after the military briefly seized power and the ruling party forced Mugabe to quit, had promised a credible vote and invited Western observers who’d been banned from three previous elections to scrutinize proceedings. But by the time Mnangagwa was declared the winner of the presidential vote in the early hours of Aug. 3, the southern African nation’s hopes of a democratic revival lay in tatters. Six people died after the army opened fire in response to unrest that erupted over the results in Harare, the capital. Nelson Chamisa, leader of the main opposition Movement for Democratic Change Alliance, rejected the outcome as rigged and several observer groups noted flaws in the electoral process.

1. What did the official results show?

Mnangagwa secured 50.8 percent of the presidential vote, a shade more than the majority needed to avoid a runoff, while Chamisa got 44.3 percent, according to Priscilla Chigumba, a judge who chairs the Zimbabwe Electoral Commission. The balance went to the other 20 candidates or were spoiled. The ruling Zimbabwe African National Union-Patriotic Front won 144 of the 210 directly elected seats in the National Assembly and Chamisa’s alliance took 64. The National Patriotic Front, another opposition party, and an independent candidate won one each.

2. What are the opposition’s complaints?

Chamisa’s alliance has a litany of objections. Prior to balloting, it complained that the voters’ role was inaccurate, there were inadequate controls over the ballot papers and the electoral commission was biased — allegations the panel rejected. After the vote, the opposition said its own unofficial count showed it had won. It said the commission’s tallies weren’t verified. It said more people voted in some areas than appeared on the roll and that it couldn’t access a fifth of the result forms that were supposed to be displayed outside the 10,985 polling stations. Chiguma dismissed suggestions that the results could be fixed.

3. What did election observers say?

The Zimbabwe Election Support Network, a local association of 34 civil rights and religious organizations that deployed about 6,500 monitors, found that the ruling party used state resources to campaign, employed food aid to entice people to vote for it, and enjoyed more favorable media coverage than the opposition, It also said the final voters’ roll was released too late to allow sufficient time to analyze it. Western observers were equally critical, with European Union monitors saying there wasn’t a “level playing field.” The International Republican Institute and the National Democratic Institute from the U.S. said improvements in the political environment probably weren’t enough to convince voters they could oppose the ruling party without fear of retribution. The election won praise in preliminary assessments by observers from the African Union and the Southern African Development Community — groups that seldom criticize their member states.

Chamisa says the opposition will use all legal and constitutional means to overturn what it sees as a stolen election. While past attempts to have disputed results overturned have failed, the Constitutional Court has ruled against the government on several occasions. Mnangagwa has called on Chamisa to work with him to promote peace and unity. While the time for politicking is over, he says, the country is a democracy and anyone has the right to challenge the election results in court.

5. What challenges does a new government face?

The new administration will face a mammoth task resuscitating a dysfunctional economy. In 2000, Mugabe’s government authorized the often-violent seizure of about 4,500 mostly white-owned commercial farms to redistribute to black citizens in a land-reform program that resulted in a collapse of agricultural output. Mass unemployment, emigration and hyperinflation followed. A cash crisis limits withdrawals from banks and the government’s ability to pay state workers on time. While it was hoped that the conclusion of the electoral process would unlock pent-up investment demand in agriculture and mining, the disputed outcome and ensuing violence risks derailing or delaying a recovery. The country was once known as an agricultural powerhouse, has the world’s biggest platinum reserves after South Africa and also has deposits of gold, coal and iron ore.

6. What did the ruling party campaign on?

Zanu-PF says it wants to attract $5 billion a year in foreign direct investment; last year Zimbabwe secured $289 million, according to the United Nations Conference on Trade and Development. The ruling party has promised to respect property rights and maintain a stable and predictable business environment, though it also intends ensuring that the retail industry is reserved for indigenous people and forcing mineral producers to process part of their output within the country to create jobs. Its other pledges include ensuring the judiciary is transparent and independent and delivering 1.5 million homes over the next five years to address housing shortages.