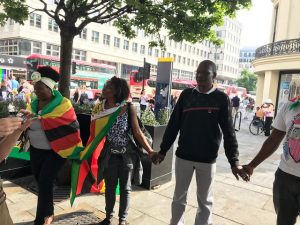 The endemic corruption in Zimbabwe has seen the country’s cricket teams suspended by the International Cricket Council. ICC funding to Zimbabwe has been frozen and Zimbabwe is now unlikely to be able to play the scheduled T20 World Cup matches in October.

The decision was made at the ICC’s annual meeting in London and follows the Zimbabwean decision last month to sack the board of Zimbabwe Cricket. ICC Chairman Chashank Manchar said what happened in Zimbabwe was a serious breach of the ICC constitution and could not be allowed to continue unchecked. He called for the elected cricket board to be reinstated within three months.

Mr Manchar said: ‘We do not take the decision to suspend a member lightly but we must keep our sport free from political interference’. Reports say the ICC was concerned that millions of dollars of funding it provided may have been diverted rather than used for the development of the game

The mess has been blamed on President Mnangagwa’s son-in-law Gerald Mlotshwa who was recently surprisingly appointed Chairman of the Sports and Recreation Commission which took the decision to suspend the board.

A ZC official told Zimlive that the organization depended on ICC grants and there will be no tours and no salaries for staff and players until the government stops interfering in cricket.

The scandal of Zimbabwean cricket is dwarfed however, by revelations in Parliament that top government officials don’t know anything about what happened to $3 billion provided by the Treasury to fund Command Agriculture.