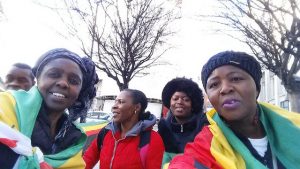 Happy Christmas? After a seamless transition from Mugabe’s hypocrisy to Mnangagwa’s self-delusion, most people will have little to celebrate. Food, fuel, fares, medicines and school fees are a perpetual struggle thanks to an unreformed Zanu PF.

Zanu PF scoffs at the South African Constitutional Court declaring illegal the disbanding of the SADC Tribunal. And complains that the South African demand for Grace Mugabe to stand trial for assault is ‘harassment’. That sums up Zanu PF: complaining about assault by the privileged is harassment.

The commission investigating the army shootings after the election dismissed Zanu PF’s claim that the shots were fired by opposition supporters. The lies told by Mnangagwa and the army were exposed by the commission’s report. Nevertheless the government promotes the officer in charge.

As political commentator Alex Magaisa puts it: ‘You set up a commission to investigate violence. The commission categorically says the soldiers you command and deployed shot and killed civilians and injured 35. But not a single word of apology or acknowledgement to the victims, survivors, and relatives.’

So as inflation rises above 30% because of Zanu PF’s financial ineptitude and corruption, it appears there has been no change to Mugabe’s master plan to keep Zanu PF in power and Zimbabweans in slavery.

It may be futile for the diaspora to wish our family and friends in Zimbabwe a happy Christmas, but you can be sure that we will be thinking of you.

FOR THE RECORD: 12 signed the register.