I’ll be back for more talks: Mbeki 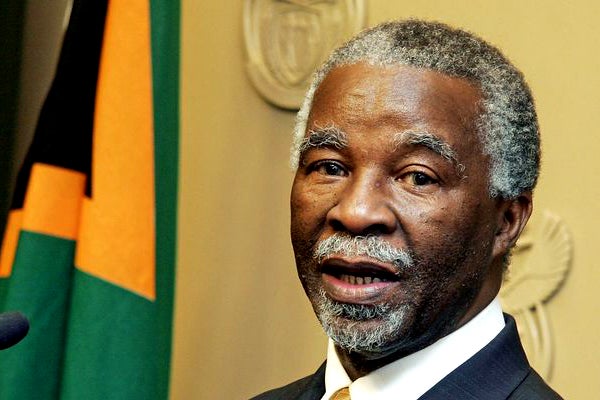 PROSPECTS for talks between President Emmerson Mnangagwa and his arch rival, opposition MDC leader Nelson Chamisa grew yesterday after former South African President Thabo Mbeki yesterday said he would be returning to the country before year-end for further talks.

Mbeki was in the country since Monday and held marathon meetings with Mnangagwa, Chamisa, members of the Political Actors Dialogue (Polad) — a grouping of presidential candidates in last year’s elections, as well as churches and civic organisations.

The former South African leader left the country yesterday, but said he would be back later this month “to talk a bit more”.

He said the purpose of his visit was to listen to various players and appreciate the problems the country was facing.

“We have been talking to everybody and everybody, of course, is interested to discuss the situation and I am interested too in the situation here, just to understand what has been happening and to say very basically, we support the efforts of the Zimbabweans to address their fundamental challenges,” Mbeki said yesterday.

“Whatever the challenges are, (it is important) that everybody gets together, so we have been listening to everybody and we have finished that listening process. So we will come back later this month to continue to finalise that.”

Zimbabwe has experienced an accelerated economic decline since Mnangagwa took over after his late former boss, Robert Mugabe, was deposed by his army chiefs in November 2017.
A disputed poll last year only deepened the crisis, with Chamisa refusing to recognise Mnangagwa’s victory.

Previous mediation attempts failed after Mnangagwa demanded that Chamisa first accept him as President of the country, a demand rejected by the youthful opposition leader, who wanted the legitimacy issue to be on the agenda.

Mbeki’s visit this week came at time there are increasing calls for dialogue between the two political protagonists to resolve the political and economic crisis in the country.

During his visit, Mbeki first met Mnangagwa and then Chamisa, before meeting again the Zanu PF leader and then went back to Chamisa.

“We were listening because we want to give as much support as we can because, as I said, there are many people in Zimbabwe who are saying the country needs to address many challenges, political reform, economic and so on,” Mbeki said.

“We are neighbours and we hope to give the necessary support. I have lots of confidence in the leadership of the country, all of them, the collective leadership and coming together as they have done in the past, there is a lot of capacity to resolve all these problems, all the reforms, whether they are political or not.”

In 2008, Mbeki led a Sadc-mediated process that birthed a Government of National Unity between Mugabe and the late MDC leader Morgan Tsvangirai following a disputed and bloody presidential run-off that year. The former South African leader yesterday said he was confident talks would again break the political gridlock.

“I think it is possible, but we are listening and, as I said, we will come back later in the month and talk a bit more.”

Meanwhile, the National Peace and Reconciliation Commission (NPRC) said it was important for Zimbabweans to find each other and dialogue towards a conflict-free country.

Speaking after meeting the MDC leadership for the first time, deputy chairperson Lillian Chigwedere said the commission was working towards a united and healed country and described the meeting as “a step in the right direction.”

“We have had a series of engagements with stakeholders since 2018 when we held our strategic planning. One of the outstanding engagements was with the MDC,” she said.

Chigwedere said during the meeting, the commission outlined its roles and other issues, while the MDC pointed out that many of its supporters had been victims of politically-motivated violence.

“After our presentation to them on what we stand for and how we operate, the space was opened for interactions, where issues to do with perception, independence (were discussed) and we reiterated to them that according to the Constitution and the Act, the commission is independent and works with everyone. We are an apolitical body that works with everyone.

“We are a commission that is supposed to bring the nation together. We need a reconciled nation, a healed nation and a united nation,” she said, adding the NPRC has to address past conflicts to bring about justice, facilitate dialogue and ensure the rehabilitation of victims.

Chigwedere said they have a complaints handling desk were everyone was free to visit.

“The very fact that we are engaging the parties means we are going to have people talk to each other. Facilitation of dialogue is one of our mandates and we work with all stakeholders, traditional leaders, churches and others to create a cohesive society that talks to each other without resorting to conflict. If conflicts are not addressed, they keep on repeating themselves,” she said.