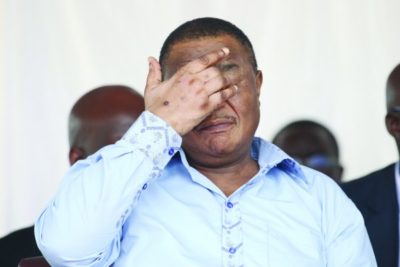 Top government sources yesterday confirmed the development, although Information minister Monica Mutsvangwa was not picking calls when sought for comment, while the permanent secretary in the ministry, Ndavaningi Mangwana, referred all questions to presidential spokesperson George Charamba.

NewsDay has it on authority that the VP has not been well in the past week.

Attempts to get a comment from Charamba were fruitless, as his phone went unanswered, but sources said Chiwenga left for Cape Town after briefly visiting a local health centre on Wednesday evening.

Mutsvangwa, her deputy Energy Mutodi and Charamba did not respond to questions sent to their mobile phones on the matter.

“The VP on Wednesday was at Avenues Clinic from around 4pm until around 7pm. He then left for home. The situation deteriorated, forcing him to seek further attention in Cape Town,” said a source.

The former army general, who led an operation to remove former President Robert Mugabe in November 2017, was said to be receiving treatment at Groote Schuur Hospital in Cape Town.

Chiwenga, according to sources, was taken ill after attending a brief politburo meeting and checked in at Avenues Clinic — an elite hospital in the city centre.

His health had improved in recent months after being taken ill in October last year and being airlifted to South Africa then for close to a month.

Government, in October, said the VP was being treated for “exhaustion” and 1980s injuries from the war of liberation.

The Vice-President and his wife, Marry, have been showing signs of illness, with visibly swollen hands and discoloured skin patches, something he said was due to poisoning.

Last year, Chiwenga suggested he was paying the price for removing Mugabe, triggering speculation he might have been poisoned.

“I have decided to talk about it because that is what you see, but you should know that everything that happens, comes with a price,” he said then.

“Today, we want to set the record straight on one issue, now that journalists are here. When we did our operation to normalise things in the country, I was with General [Phillip Valerio] Sibanda and many others. They are brave men, indeed.

“We also informed vaMatanga [Godwin,) then Deputy Commissioner-General of Police, but now Commissioner-General] about the plan; it was during that time that I fell ill. I had this skin disease [nhuta] that affected my whole body from beneath my feet to my back and the journalists started saying I was using skin lightening creams, but that was not the case. I was sick,” the Vice-President, a career soldier who commanded Zimbabwe’s military for almost  a decade-and-a-half, said then.

The Zimbabwean presidium has been criticised for going on foreign medical sojourns, shunning local State health institutions that are on the brink of collapse due to poor resourcing.

Recently, doctors embarked on a 40-day protest over poor remuneration and working conditions, lack of drugs and medical equipment, demands which the government promised to look into.