I’m better than you: Chamisa to ED

Source: I’m better than you: Chamisa to ED – NewsDay Zimbabwe 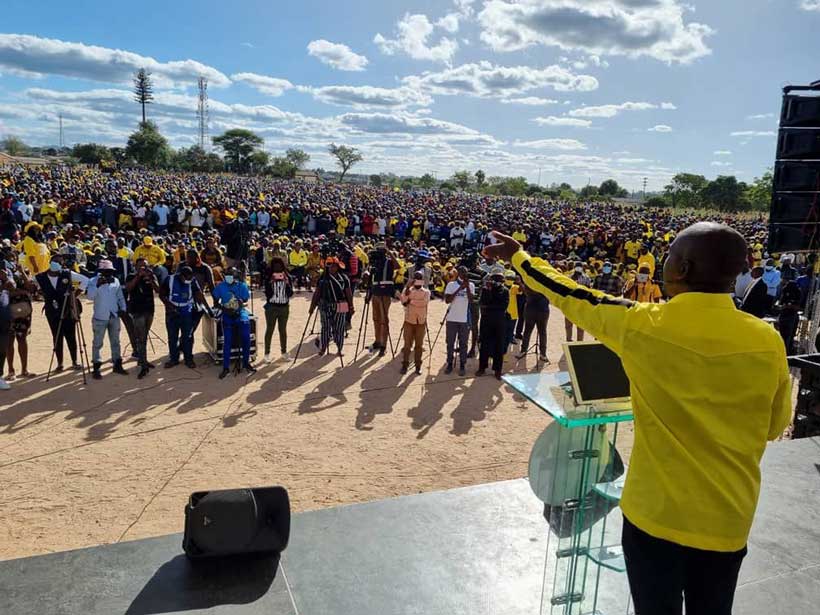 CITIZENS Coalition for Change (CCC) president Nelson Chamisa said he would defend the ideals and gains of the liberation struggle better than the current administration.

Addressing thousands of supporters at Rujeko Grounds in Masvingo yesterday Chamisa, said the time was ripe for President Emmerson Mnangagwa to step down.

“We want Mnangagwa to retire and watch how we run this country. If he goes, we don’t need five days to turn the fortunes of the country, we will stop corruption and theft of national resources,” Chamisa said.

“I can assure you that I can defend the ideals of the revolution better than Mnangagwa. Under my leadership, I will not allow an inch of Zimbabwe, its resources and sovereignty to go into the hands of any foreigner.”

Chamisa, who lost a Constitutional Court challenge after Mnangagwa won the controversial 2018 presidential election by a narrow margin, said he would not take the same route.

“This time I am not going to take any issue of electoral fraud to court. I tell you this time it is never going to happen, not this time around,” Chamisa said.

On land reform, he assured resettled farmers that he would not evict or displace them from their farms.

“If you are a farmer, don’t worry. We will not take your farm from you, there will be no reversal of the land reform programme. In fact, we will give you title deeds for your farms, unlike Zanu PF which abuses the land question to make you support it,” Chamisa said.

The CCC leader hit back at claims that the opposition had failed to run local authorities.

“He (Mnangagwa) has destroyed the country, yet he expects local authorities to function. His stance is equal to asking a person milking a dead cow to have milk, if the national economy is dead, councils can’t perform,” Chamisa said.

He preached peace, despite attacks on his supporters and himself on several occasions.

“We can’t allow anyone to die for the attainment of political power. People must be allowed free political choice, if your choice is Zanu PF which brings you hunger, then that is your choice, if you choose CCC for a better life, I will deliver the best for you,” he said.

Zimbabweans are going to the polls on Saturday to elect 28 parliamentarians and 105 councillors.