In Cash-Strapped Zimbabwe, Convenience of Mobile Money Comes at a Steep Cost

Zimbabweans have long struggled with cash shortages, and many have turned to “mobile money” for daily transactions. With no need for a bank account, the system is convenient – at least, until you want to withdraw your funds. 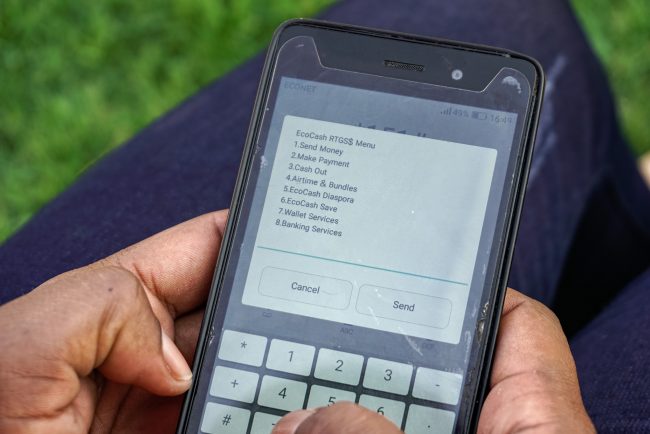 Rutendo Garwe looks at her phone as she calculates how much money she has in her mobile-money account. Garwe is one of many Zimbabweans who rely on mobile-money agents to turn their digital funds into cash. Gamuchirai Masiyiwa, GPJ Zimbabwe

HARARE, ZIMBABWE — Rutendo Garwe stares at her phone, calculating how much money she will lose to take the bus.

Garwe has her funds in “mobile money,” a cellphone-based savings account that uses Zimbabwean dollars (ZWL) as a digital currency – a convenient way for Zimbabweans to make financial transactions without banks.

But while mobile money can be convenient in a cash-strapped society, turning it into physical funds is difficult: Garwe and other Zimbabweans must use agents who charge commissions as high as 40% for each transaction.

To take the bus, which doesn’t accept mobile money, Garwe must pay an agent a 30% commission to buy – or “cash out” – her coins.

Zimbabwe has experienced cash shortages since 2016, when hard currency became increasingly difficult to find. Mobile-money platforms and their agents provide a service by converting digital money into cash, which is sought after because Zimbabweans can purchase some goods and services more cheaply or only with hard currency. Even banks cannot disburse cash, as they have also been affected by shortages.

Officially, agents can only charge an approved commission, which can start as low as 1.6% and should rise to no more than 15%, depending on the transaction amount. In reality, they charge customers as much as 40% to buy cash.

Garwe must withdraw 100 ZWL ($5.99) a week for transportation, but only about two-thirds goes to the bus fare; the mobile-money agent gets the rest.

She relies on mobile-money agents throughout her day. Garwe, a mother of four, buys groceries on the black market because goods cost less than at formal grocery stores. She must make those purchases in cash, forcing her to use agents who charge a hefty commission.

“I have no choice,” Garwe says. “I lose almost half of my salary by buying cash from mobile-money agents.”

Cellphone companies introduced mobile money to Zimbabwe in 2011 to provide financial services to people without access to banks, especially in rural areas. Zimbabwe has 12.7 million active mobile subscriptions, according to a 2018 report compiled by the Postal and Telecommunications Regulatory Authority of Zimbabwe.

Mobile-money agents facilitate transactions in the financial sector without the need for a bank account and allow people to make payments over long distances. Agents face few barriers to the industry, but they are not paid a salary – only compensated through commissions.

Their high rates have not gone unnoticed by authorities. The Reserve Bank of Zimbabwe announced a ban in September on all cash transactions that use mobile platforms, an attempt to curb the buying and selling of hard currency at a rate beyond approved charges.

It lasted two days. A court overruled the directive following a lawsuit from Cassava Smartech Zimbabwe Limited, owner of a major mobile-money platform in Zimbabwe known as EcoCash. The platform boasts 10.5 million accounts and 51,000 mobile-money agents across the country.

Before the Reserve Bank’s attempted ban on cash transactions, the company said it did not permit unauthorized commissions and had suspended over 4,000 agents who were charging premiums beyond the approved rates. It also urged the public to report any agent who overcharged.

EcoCash agents blame the cash shortage and staggering inflation. They argue the company no longer supplies them with hard currency. The commissions are necessary, they say, to cover the high cost of acquiring cash.

“We used to get cash from EcoCash as a float, and we could also go to the bank,” says EcoCash agent Itai Khumalo. “But now they no longer give it to us, and we have to find the cash on our own.”

Agents once relied on commissions from EcoCash, he said, but that has dropped to about 1,800 ZWL ($107) a month due to the country’s unstable currency. He makes 500 ZWL ($30) per day through cash transactions.

Some consider mobile money more the problem than the solution. Eminasi Mutenge, who operates a grocery shop downtown, feared the initial cash transaction ban would affect her business.

“I only do cash sales, because that’s the only way I can manage to buy foreign currency at a lower rate and restock my shop,” Mutenge says. “I tend to bargain more if I have cash than when I have mobile money.”

Mobile-money has bolstered financial inclusion by helping people in the informal economy – where most activity takes place – make transactions. But the mobile-money ban and its reversal have created instability and confused the public, says Prosper Chitambara, an economist with the Labour and Economic Development Research Institute of Zimbabwe. This, along with inflation, has encouraged people to spend more and save less.

“The issue is a structural problem, which needs structural change in the economy,” Chitambara says. “People are still paying high premiums to get access to cash because the real issue has not been solved.”

This leaves customers caught between the convenience of quick cash and the frustration of bleeding money. Mobile-money users like Garwe are starting to demand accountability. The solution, as she sees it, is simple.

“EcoCash needs to monitor their agents and the government has to also do some monitoring,” Garwe says. “They need to make sure banks have enough money to ensure people can access cash.”