In topsy-turvy Zimbabwe, stocks may plunge if confidence returns

Lagos – If investors want a sign that confidence is returning to Zimbabwe following the armed forces’ seizure of power from President Robert Mugabe on Wednesday morning, they should look for stocks to fall.

In Zimbabwe’s dysfunctional market, the deeper the economy has sunk, the more equities have soared. The nation’s main gauge is up 322% in the past year in dollars, the best performance globally, even as a cash shortage choked businesses and forced people to sleep in streets near banks so they could make withdrawals in the mornings.

That’s happened because Zimbabweans see stocks as one of the few protections against inflation, which has been spurred by the government printing a new form of money – called bond notes – to deal with the lack of dollar bills. Greenbacks have been the main legal tender since Zimbabwe scrapped its own worthless dollars in 2009, but have become scarce as Zimbabwe’s balance of payments position worsened.

Similarly, bitcoins trade at about $13 000 on Zimbabwean exchanges, around 80 percent more than on international markets.

Zimbabwean equities fell 1.3%, the most in two months, on Wednesday. It’s too early to tell if that’s the start of a trend.

But any loosening of capital controls and increase in dollar liquidity could see stocks fall further as foreign investors who have been trapped in the country – including Mark Mobius’s Franklin Templeton and JPMorgan Chase – pull out and valuations become more realistic.

“A return to normal conditions may very well lead to the stock market doing badly,” said Neville Mandimika, an analyst in Johannesburg at FirstRand’s Rand Merchant Bank. “The knee-jerk reaction may very well be initial outflows.”

There could eventually be inflows, especially into agricultural stocks, if investors perceive improvements in Zimbabwe’s long-term outlook, he said.

For now, the ripples in Zimbabwe probably won’t spread far beyond its borders, given how ruined the economy has become after 37 years under Mugabe’s rule.

“Even if the political crisis in Zimbabwe intensifies, the economic implications for the rest of the region are small,” said William Jackson, a senior emerging-market economist at Capital Economics in London.

“The economy is a shadow of its former self. GDP per capita was much higher than the regional average until the 1990s; now it is about 30% lower.” 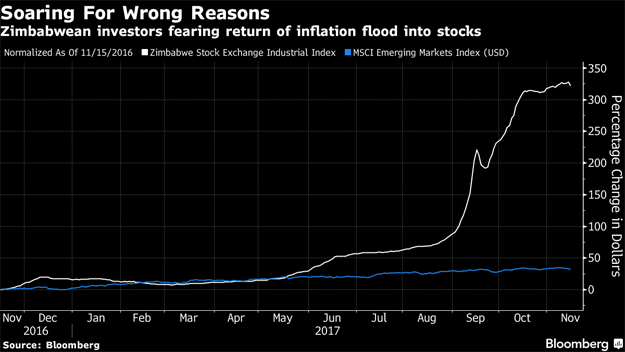