Eunica Simango sits with downcast eyes as she waits at a relief centre in Chimanimani.

Healthcare workers are concerned about increased health risks in cyclone-hit Zimbabwe after some HIV and AIDS patients living in the affected areas lost their medication and health cards in the floods. 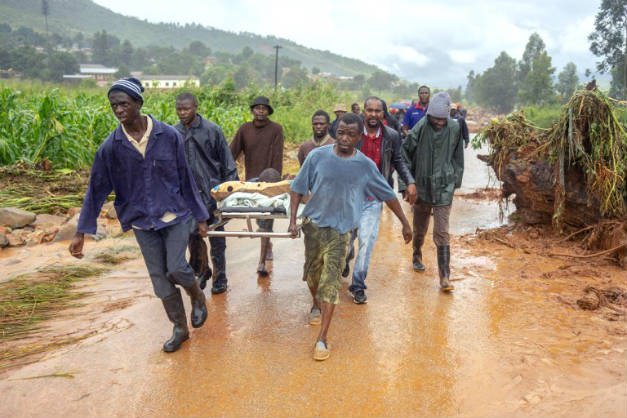 A rescued man is carried on a stretcher in Ngangu township, Chimanimani, eastern Zimbabwe, after Cyclone Idai hit the area. (Zinyange Auntony/AFP)

Chimanimani – Eunica Simango sits with downcast eyes as she waits at a relief centre in Chimanimani.A week ago, everything she owned, including a poultry run where she kept chickens, was swept away by a mudslide when Cyclone Idai, after lashing Mozambique, turned its wrath on eastern Zimbabwe.Yet this material loss is nothing compared to the gnawing absence of her teenage daughter, who was washed away in the raging tide.

She is one of nearly 200 people who are listed as missing, 30 of them schoolchildren, in addition to 139 confirmed dead.

“My house, my property, chickens. I am now surviving on handouts something I never imagined myself doing.

“The most painful thing is: I don’t know where my daughter is.”

Well-wishers set up the temporary shelter in a conference room at a local majestic Chimanimani Hotel to feed victims of the storm.

But resources in this impoverished country are slender, and there is no guarantee that the centre can stay open.

‘This is the situation’

At another relief centre, food too was meagre.

“Do with the little that we have,” volunteer Daina Mandevhana told the hungry.

“We should not expect to eat until our tummies are full or complain saying ‘at my house I used to have my tea with milk’,” she said.

“This is the situation we have, and we should accept it.”

Fears are growing of starvation in communities that have been cut off after winds and torrential rain smashed bridges and swamped or destroyed roads.

Families in Chimanimani are still rummaging through debris, hoping to recover remains of missing relatives.

Some people on long-term treatment for conditions such as HIV have lost their medication and appealed for urgent supplies.

President Emmerson Mnangagwa, after touring the area, said he had seen “unmitigated despair”.

Zimbabwe has declared a state of disaster and appealed for assistance. According to the UN, 200 000 people have been affected.

Crops and livestock have been destroyed, threatening enduring hunger and poverty for those who do survive.

“There are people who have lost their homes and property places in places like Kopa and Rusitu,” said Shawne Kidd, a local businessman who is helping in relief and recovery efforts.

He and other volunteers are running a feeding centre, in some cases digging into their own pockets to buy food for victims who lost their homes.

“The villagers want food but we have limited means of getting in and out. Roads were damaged and bridges broken.”

Kidd said the big problem was not lack of willpower, but the means to move things.

“There are hundreds of organisations willing to help,” he said.

“There is plenty of aid outside. The problem is getting it in. There is no airstrip. Helicopters are being used to bring in medical supplies.”