HUNDREDS of children from the country’s 10 provinces were yesterday treated to a mouth-watering lunch and received hampers courtesy of the First Lady Amai Auxilia Mnangagwa at a children’s party held in Bulawayo.

The party was held ahead of the Independence celebrations today.

President Mnangagwa and the First Lady hosted the children in Bulawayo for the first time since the attainment of Independence in 1980 and educated them on the harmful effects of drug abuse, early sexual relations, child marriages and teen pregnancies among other issues.

All along it was held in Harare.

Yesterday’s party was held under the theme: “Zimbabwe at 42: leaving No one and No Place behind.”

The children who were immaculately dressed in their school attires were imparted with words of encouragement and wisdom by the President and the First Lady.

The mother of the nation, who has a passion for the welfare of children especially the girl child, took time to interact and discuss with them on various social issues affecting today’s youths.

She expressed concern over reports that children were selling each other drugs at school. Amai Mnangagwa encouraged them to take their studies seriously. 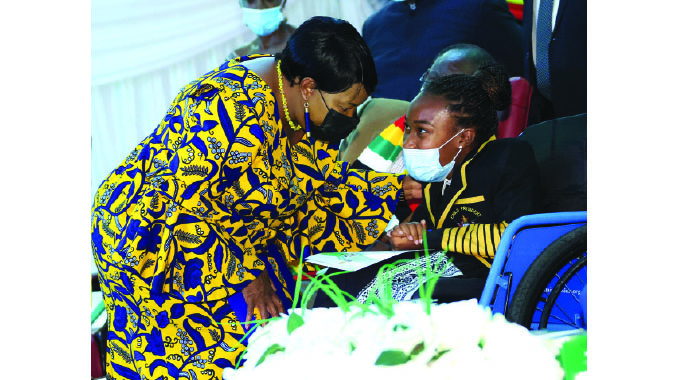 Child president Hazel Mandaza thanks First Lady Amai Auxillia Mnangagwa for taking time out to counsel the youths on various social issues affecting them such as teen pregnancies and drug abuse during the Children’s party at State House in Bulawayo yesterday. – Pictures: John Manzongo.

“I heard that it is happening in schools, is that true vana vangu?” she said and some of the children said “no” while others said “yes”.

“Some are saying ‘yes’ meaning in some schools there are some children who are becoming mischievous. As amai, I say to you do not deal in drugs. Mazvinzwa here vana vangu? Why do I say that?”

One of the children responded saying drugs were ruinous and made it impossible for children to concentrate on their education. The First Lady further asked the children if they were engaging in love affairs while still in school.

“Are there some among you who are in love at school? Do you want to get married? Will such love affairs lead to marriage? This will not lead to marriage isn’t it so? We do not want people who do that.

“During our time we used to concentrate on our studies. Please use the opportunity that you have to learn. We want you to bring certificates home from school and not pregnancies. As mothers, we do not want you to drop out of school because of early pregnancies. We do not want to see that. Shuviro yangu saAmai ndeyekuti mukoshese dzidzo yenyu muzove vatungamiri vemangwana.

Furthermore, she asked; “Who among you are engaging in sexual relations? What are the diseases that are brought about through sexual intercourse? Who can tell me. Musanyare zvenyu nekuti mai nevana vavo vanotaura zvese,” she said.

One of the children said: “It causes early pregnancies, STIs and many diseases for example HIV and Aids. It also results in some of us dumping children because you will not be prepared for that.”

In response, the mother of the nation said it was prudent for the children to leave issues that result in unnecessary problems.

“You have all learnt the dangers of engaging in sexual relations before the time is right. We do not want you to have many children with different totems, this brings disunity in families and amongst those children. Some girls sleep with boys while intoxicated making it difficult for them to know the father of that child. Prioritise your education my children,” she said.

The teachings dovetailed with what the First Lady has been and is still teaching through her countrywide Gota/Nhanga/Ixhiba programme aimed at bringing about morally responsible citizens.

Through the programme, the First Lady has been speaking out candidly against drug abuse among boys and girls as well as child marriages. As a bona fide future of the country, the President also said children had a duty and responsibility to play a part for a better and brighter Zimbabwe by studying hard, being respectful and rejecting drug and substance abuse.

“Hence as the bona fide future of this great country, I call upon you our children to be aware that you have a duty and responsibility to play a part for a better and brighter Zimbabwe by studying hard, being respectful, loving your country and one another, rejecting drug and substance abuse.

Speaking at the same occasion, Child president Hazel Mandaza thanked the President and the First Lady for their wise counsel.

“We appreciate your commitment and focus on eradicating poverty and other social issues that affect children. We appeal to you your excellency, to impose stiff penalties to all those who expose children to drugs and other vices that do not prepare us for a good future. My wish and desire, Cde President, is to see our generation gaining a demonstrable sense of responsibility, honesty, hard work, resilience and love for one another,” she said to applause.

“Your Excellency, as children born in a free Zimbabwe we want to assure you that the children of Zimbabwe are fully aware that the independence of this country was attained through the supreme sacrifices of our fathers and our mothers, both living and departed.

“We therefore understand our role is safeguarding that proud legacy and values as a nation and these are now happily embedded in our competency-based curriculum. We will walk the journey together until we achieve Vision 2030.

“Nyika inovakwa nevene vayo. I wish to thank all parents and guardians for their support and all the children who made this event a resounding success. Thank you your excellency, the First Lady Amai Mnangagwa and family for your valuable time to spend with us this day. As delegates we will share the wisdom you have imparted in us with our constituencies and colleagues back home,” she said.

The children who attended yesterday’s party, expressed gratitude to the First Lady for hosting them and giving them a word of advise.

“I am thankful for the opportunity and being afforded the chance to interact with our loving mother. We learnt a lot from her wise teachings. We are blessed as a nation to have a mother like her.

“We are going to be her ambassadors and teach others in our communities on the effects of drug and alcohol abuse,” she said.

Similar sentiments were echoed by another student. 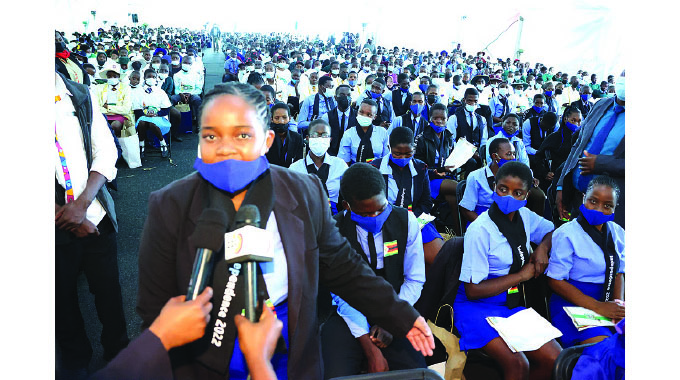 One of the schoolchildren answers First Lady Amai Auxillia Mnangagwa’s questions during an interactive session at the Children’s party at State House in Bulawayo yesterday.

“I am so excited to have attended the party. We learnt new things and experienced the First Family’s hospitality. I am very grateful for what Amai has done and it will always remain etched in our minds,” he said.