Thanks to the ‘Pandora Papers’, it has become finally clear who is behind the ‘Zimbabwe project’ in Belarus.

Emmerson Mnangagwa, the president of Zimbabwe, and Viktor Sheiman in Minsk / BelTA

In March 2018, Viktor Sheiman, the then Head of Belarus President’s Property Management Directorate, paid an official visit to Zimbabwe where he and Winston Chitando, Minister of Mines and Mining Development, agreed to establish a joint mining company.

The company was called Zim Goldfields. What was it engaged in, and who reaped the benefits? What does it have to do with Sergei Sheiman, Viktor Sheiman’s son? All this and more in the investigation conducted by the Lithuanian Investigative Journalism Center “Siena,” the OCCRP, Belsat TV, and with input from Euroradio.

The governments of both countries didn’t make a big deal of the event, and neither did the media. Zim Goldfields could’ve kept operating on the down-low if not for the accident.

In November 2020, a Chinese company got to Mutasa district and started filling the abandoned gold mines. It turned out they were not totally abandoned as ten local artisanal miners had found their death buried alive there. Only two bodies were discovered, the rest were never retrieved. 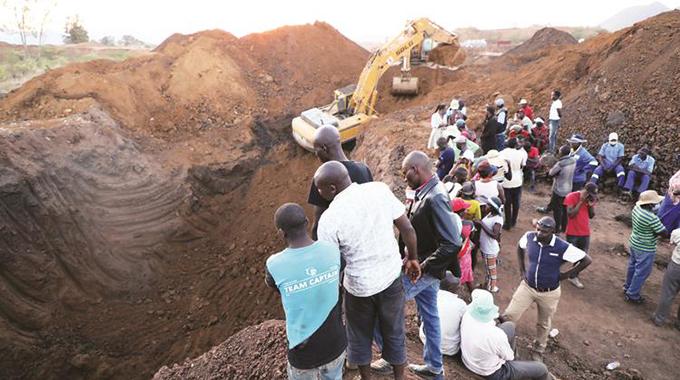 According to the Centre for Natural Resource Governance of Zimbabwe, the site belonged to a “Belarusian company called Zim Goldfields.” And a subcontracted Chinese organization Zhondin Investments (other sources call it Zhong Jin Investments), did the land development here. Families of the two deceased miners were each awarded $955 as compensation.

This news and references to the payment of taxes in Mutasa district are the only Zim Goldfields records found in the public domain.

According to the Organized Crime and Corruption Reporting Project (OCCRP), the joint company Zim Goldfields was established in April 2018. ZDMC, a government-owned corporation that controls the Zimbabwean mining industry, got 30% of its shares. The other 70% went to the UK-based Midlands Goldfields Limited, established by a Londoner named Robert Michael Friedberg.

Thanks to Pandora Papers, the biggest ever leak of offshore data, we found out that Fridberg is acting in the interests of a Seychelles-based company called Midlands Goldfields Foundation. This one was created in December 2017 by the Belarusian businessmen Alexander Zingman and Sergei Sheiman, Viktor Sheiman’s son. Each of them owns 50%.

Sergei Sheiman prefers to keep a low profile. He also doesn’t have any official connection to the Belarusian government. Previous investigations showed that Viktor Sheiman’s son does business with a former Federal Security Service (FSB) general, close to the Russian authorities.

In March 2018, Sheiman Jr. joined his father on the visit to Zimbabwe, acting as an “advisor” for the government delegation. And yes, this was right when they created Zim Goldfields, of which Sergei Sheiman became a co-owner.

Reporting on the trip results to Aliaksandr Lukashenka, Viktor Sheiman stressed that the mining operation in Zimbabwe is very advantageous for Belarus. “Africa is noteworthy because of the colossal mineral wealth that our economy needs. No one here is going to work for free. If they don’t have money, they are willing to pay with their natural resources. We’re fine with that,” he said.

Belarus and Zimbabwe: what projects Minsk is paying for

All kinds of businesses

Zim Goldfields won several special grants for gold mining in Zimbabwe as far back as May 2018. The company then hired a Belarusian (public-private enterprise) firm, Belgeopoisk, to carry out the work. When the joint company was established, the latter belonged to the Belarus President’s Property Management Directorate’s Belzarubezhtorg and Globalcustom.

Now, Globalcustom Management is the sole owner of Belgeopoisk. One of the former’s shareholders, Evgeni Zhovner, was also involved in setting up Zim Goldfields. Other documents state him as one of the managing directors of the mining company.

Inside these companies, Zhovner is known as Viktor Sheiman’s confidant. According to unofficial sources, he was on the payroll at the Belarus President’s Property Management Directorate. He also did work for Motovelo and was a vice-president for ASB Leasing (Belarusbank’s affiliate company) and a member of the executive board of Paritetbank. The bank is now owned by Said Gutseriev, a son of Russian oligarch Mikhail Gutseriev.

Another Belarusian among Zim Goldfields representatives is Dmitri Krasilnikov, who works as chief operations officer and is the son of BelAseptika’s owner. According to Dmitri’s LinkedIn profile, he joined the company in May 2018, having worked for Tekhnobank, National Bank of the Republic of Belarus, his father’s company, and other employers before. He has a degree from Cranfield University.

Dmitri’s family does not shy away from the government, too. During the 2020 presidential election campaign, his father, Andrei Krasilnikov, arranged a meeting between the employees of BelAseptika and Aliaksander Lukashenka’s trusted representative Ivan Golovaty, Director General of Belaruskali. Once, Dmitri himself managed to get into a fight with his father about the company stock, resulting in a prolonged legal conflict. In the end, Lukashenka had to personally intervene and task Alexander Turchin, the Head of the Minsk Oblast Executive Committee, with resolving the dispute.

Belgeopoisk was established as a public-private enterprise in 2016. First, the company was supposed to do amber mining on the territory of Belarus. But this business idea turned out to be unviable.

Now, Belgeopoisk does geological exploration somewhere else. Their geologists, accompanied by their security guards, have at least one usual destination country. And that’s Zimbabwe. They also had business trips to other countries, like South Sudan, but it seemingly didn’t pan out. The company’s security service employs Belarusian defense and law enforcement retirees. Few people work there officially, it appears, judging by the information obtained by the Cyber Partisans.

One of those employees is a former Special Ops commando Evgeny Chanov. The media noticed him when he became the first director of GardService, a private security company established in 2020. It was his persona who helped Euroradio with one of its latest investigations. Thanks to Chanov, it was possible to connect the first Belarusian private security company to the Belarus President Property Management Directorate. Now, GardService is owned by Alexander Metla, Viktor Sheiman’s associate. Metla is also a director of the Stalin Line Complex and head of the charitable foundation Memory of Afghanistan.

As Euroradio found out from the sources close to Zim Goldfields and Belgeopoisk, all the significant financial decisions for the latter company are made by the “advisors” appointed to work there from the military and security services and the Belarus President’s Property Management Directorate. Among these advisors are Evgeni Zhovner and Alexander Romanovsky.

Zhovner, along with Romanovsky and Anton Novik, became the owners of Globalcustom Management in August 2020. The company’s director on paper is Valery Mikhailov, a former Ministry of Internal Affairs officer.

Anton Novik is a presidium member of the Belarusian Judo Federation. His father, Anton Yuljanovich Novik, is a law enforcement colonel, senior lecturer at the Academy of the Ministry of Internal Affairs of the Republic of Belarus, and a well-known sambo athlete. As the unofficial sources claim, he also served in the military unit No. 01549, or, in other words, Lukashenka’s Personal Security Service.

The last owner, Alexander Romanovsky, is a dark horse. According to the source close to Zim Goldfields and Belgeopoisk, he also comes from law enforcement. The bet is he’s from KGB. Now, he owns shares in YuRANEKS-bezopasnost, a company registered in June 2020. His business partner, Dmitry Pobyarzhin, is an ex-KGB spokesman.

Another shareholder of YuRANEKS-bezopasnost is Big Sport Club, “supporting physical training programs development in Belarus.” 66,7% of the company shares belong to Alexander Chorniychuk, a deputy director of the Belarus Field Hockey Federation. And the other 33,3% – to Kristina Letyago. Her husband, Maksim, is the CEO of this company.

In December 2018, local authorities detected violations on one of the sites where Zim Goldfields was operating. In 2021, the government of Zimbabwe banned riverbed mining. To add to that, the problem with illegal miners did not just go away. All that made the company cease working near Penhalonga, in Mutare district, one of the few sites where it could legally do gold mining.

Anyways, local problems do not stop Zim Goldfields from working elsewhere in Zimbabwe.

Thanks to the global data leaks, Panama Papers, and the Cyber Partisans, we now know who owns the Belarusian mining industry in Zimbabwe and what buffers they use. They are the former security apparatus members (Novik, Romanovsky, Chanov, Mikhailov, and others) and those who hail from the Belarus President’s Property Management Directorate (Zhovner; Viktor Sheiman’s friends and business partners, such as Alexander Zingman and Alexander Metla). Finally, they are the children of high-profile Belarusian public officials and businessmen like Sergei Sheiman and Dmitri Krasilnikov.

The text was written under the Investigative Journalism Accelerator project.